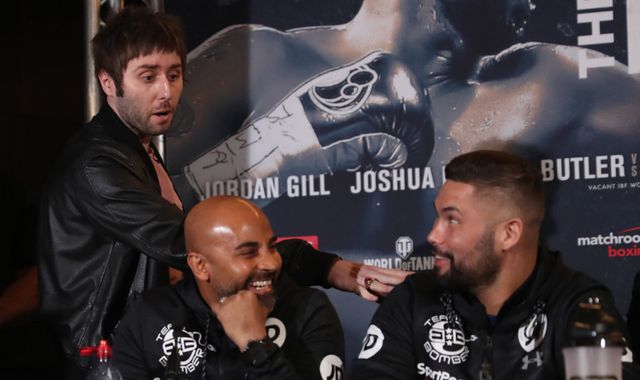 One of the biggest rematches in recent memory is going down when David Haye and Tony Bellew step back into the ring together on Saturday night, but for some reason talk in the run up to the fight has been dominated by The Inbetweeners.

This all began during Monday’s press conference when Team Hayemaker’s Adam Moralee tried to rouse up the crowd with a speech that just ended up being horribly lame and awful and very akin to when Will from The Inbetweeners tried to do anything similar during the classic TV show. Bellew was quick to call him on this afterwards during his speech, and the clip quickly went viral because it really was hilarious:

Yep, that’s real jokes. However, the joke was topped (and perhaps even peaked) today when James Buckley AKA Jay from The Inbetweeners showed up at the final Bellew and Haye press conference and handed Moralee a briefcase in true Will fashion. Bellew was suitably taken aback, but did manage to call him a briefcase wanker and get a couple of jibes in before Buckley walked off, like he had never even been there.

Really, really bizarre scenes there. Don’t think I’ve ever heard of a boxing match – or anything – that has had a buildup dominated by a classic TV show that finished about ten years ago.

Still, I suppose it’s got more people involved and excited for the rematch, which I’m sure most of you will be tuning in for. Especially now that The Inbetweeners are involved.

For more of the same, check out David Haye’s bizarre injury that led him to pull out of his previously scheduled bout with Bellew. Weird.