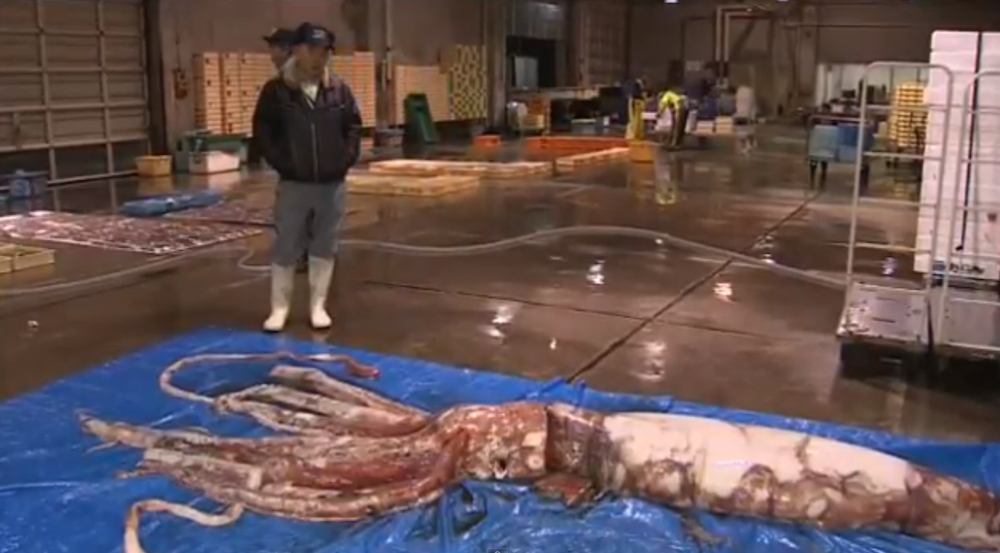 Scarily, there has been a considerable rise in the number of sightings of giant squids in the last couple of years.

Over the last couple of years, there has been a considerable rise in the number of giant squids reported, but usually these are either seen via underwater cameras or wash up dead in the nets of fishermen trawling for some other kind of catch. The difference here is that one rocked up alive in the nets of these Japanese fishermen, measuring almost three and a half metres long.

The squid was captured and released into a closed pool with some other fish. Unfortunately after a few hours it died, probably because it wasn’t used to the environment and being so far above its usual sea level.

Fishermen are speculating that giant squids are moving closer to the surface. Traditionally it’s been thought that they reside between 600 and 1800m below sea level, but the fact that they keep getting caught up in the nets means that they’re coming closer to 300m below sea level as that’s the limit of where the nets are dragged. Fisherman Shigenori Goto is particularly nervous about this development:

I had seen no giant squid before in my 15-year fishing career. I wonder whether it may be some kind of omen.

Is it an omen? Or is it something to do with the Fukushima nuclear power plant dumping 400 tonnes of radioactive water into the ocean every single day? We think it might be the latter.