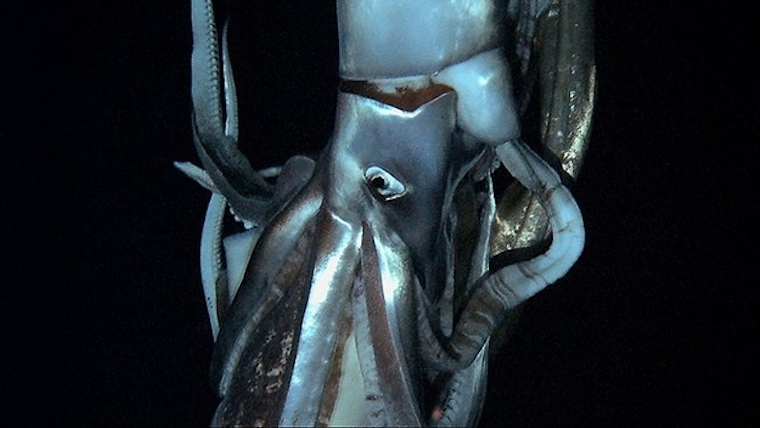 After years of searching for it, one of the final mysteries of the deep has finally been solved as footage of the the 10 foot long giant squid has finally been captured on camera. It has been described as ‘wonderful’ and ‘beautiful’ by a Japanese scientist obsessed with giant squids.

Here at Sick Chirpse we love weirdass creatures from under the sea, and Lazer Horse is always writing about them. Check out his articles here – the wierdest creatures in the ocean and the weirdest creatures in the ocean #2 – to get an idea for the kind of gross, weird and generally terrifying creatures that exist in the murky depths. Those creatures just so weird and creepy and messed up that you can’t help but want to look at pictures of them and think about how the hell they have managed to be created and how the hell they manage to exist floating around in the sea doing completely weird stuff like eating plankton and/or each other and the other weirdass creatures that are way smaller than them.

One creature that definitely isn’t small that hangs out way down low under the ocean is the giant squid. The giant squid has been described as one of the last great mysteries of the deep, although I’m not sure how accurate that is because I’m fairly sure there are some areas of the ocean that nobody has even got close to exploring yet but aside from that I do know that scientists have been trying to get a giant squid on camera for years now so it is still a fairly big mystery, if not the ‘last great mystery of the deep.’ And it seems like they’ve finally done it. Here’s a quick low down on the mystery of the giant squid in a tidy little infographic before we check out the footage: 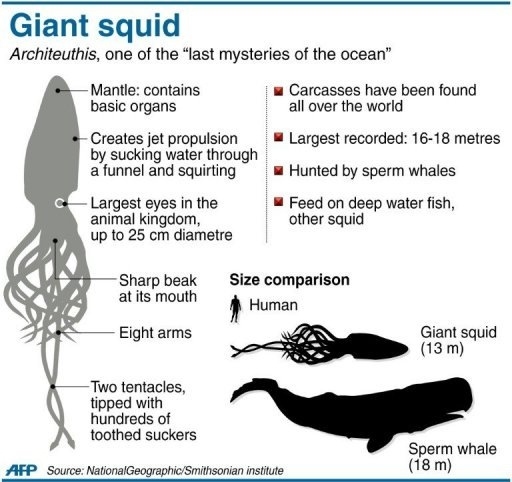 Roughly 1000km south of Japan in the Pacific Ocean near the Ogasawara Islands and 900m below the surface,  a team of Japanese scientists has finally managed to get some footage of the giant squid in action. It’s the culmination of over 100 missions and 400 hours spent tracking it through the sea, where the scientists would spend hours upon hours in a cramped three man submarine trying to find out just where the hell the giant. squid was. Those guys must really have a thing for the giant squid huh. But they got it in the end and you can check out the footage below:

â˜› Read Next: Unexplained Underwater Sounds – Could It Be The Kraken?

I guess it isn’t really that impressive because there’s no real sense of scale and the footage is real blurry for some reason but you have to admit that it’s cool that they finally got some footage of it after looking for it for so long. It’s going to be shown on the Discovery Channel in a documentary later on this year so maybe there’s some more actually good footage that they’re saving for that, or they’re gonna get some more or something and this is a teaser. Here’s hoping because that footage really wasn’t all that.

The comments of one of the lead scientists on the mission, Tsunemi Kubodera about the process of tracking down the giant squid are pretty golden though. Here’s his full quotes and then I’ll say some stuff afterwards about how weird he is:

‘ Many people have tried to capture an image of a giant squid alive in its natural habitat, whether researchers or film crews. But they all failed. These are the first ever images of a real live giant squid. If you try and approach making a load of noise, using a bright white light, then the squid won’t come anywhere near you. That was our basic thinking. So we sat there in the pitch black, using a near-infrared light invisible even to the human eye, waiting for the giant squid to approach. I’ve seen a lot of giant squid specimens in my time, but mainly those hauled out of the ocean. This was the first time for me to see with my own eyes a giant squid swimming. It was stunning, I couldn’t have dreamt that it would be so beautiful. It was such a wonderful creature.’

OK. So first of all it’s definitely kind of smart that they figured out how to attract it by not being noisy or using any lights, BUT seriously it must have been the worst ever for those three dudes sitting a pitch black submarine not saying anything to each other for over 100 hours just hoping that a giant squid would wander past. Like I said earlier, these guys must have seriously loved giant squids to spend so much time searching for one.

And I guess it was worth it because they finally saw one of the dickheads. And judging by Kubodera’s reaction it seems like they completely lost their shit over it. I mean who the hell would actually describe a squid as beautiful and wonderful and kinda imply that they have dreamt about it in the past? I guess the answer is a crazy Japanese scientist who is obsessed with giant squids, but that doesn’t make it any less weird does it? I wonder what his next plan of action is now he’s finally filmed it? Jerk off to the video? Or try and catch it so he can watch it some more and maybe get eaten by it or something? Creepy.