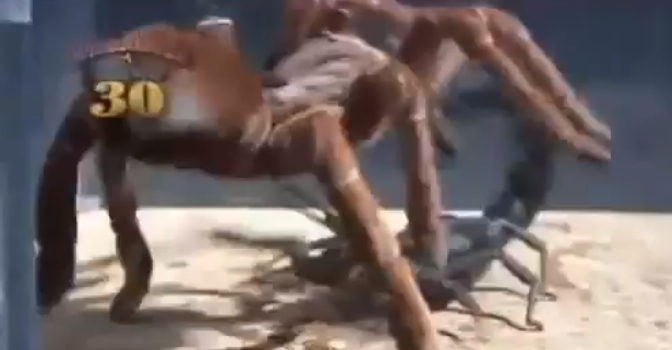 Over in Japan someone has actually created a TV show where they get two of the grossest and creepiest bugs they can find and then just make them fight to the death. It’s awesome. Why hasn’t this happened sooner?

A while ago we posted this video of a wasp and a spider having an absolutely awesome battle to the death and it went down really well with all you Sick Chirpsers out there, so it’s kind of surprising we haven’t featured more bug battles since then because qutie frankly they are awesome and everyone seems to dig them. I guess we’re just kinda dumb like that sometimes. So it’s a good thing that our boy JP sent through this website that’s sole purpose of existence seems to be to collect episodes of some weird Japanese show where they actively put two different bugs up against each other in a fight to death and host them for everyone to watch. It’s called Japanese Bug Fights fittingly.

It seems like this is an actual TV show in Japan from the way that the videos are presented, because each bug gets a long intro section where I assume they list the bug’s characteristics and deadly weapons or what have you. I don’t know because I can’t speak or read Japanese so unfortunately I have no idea what’s going on in these sections. But that’s definitely what it looks like. Then the two bugs are placed in some kind of see through box and left to it. And normally they just start going at it and fighting each other and it’s completely gross and scary and weird but you’re also completely unable to turn away because of those very reasons.

I guess it’s mainly because bugs are so goddamn creepy and weird and you’re just watching the fights to see what the hell they are going to do half the time. Why the hell did anything even create anything that looks like this? Whether it was God or evolution (both abstract possibilities) they must have been having nightmares or been really pissed at humans or something when they decided to gift the planet with these little bastards. Still, I can’t stop watching these Japanese Bug Fights because they’re just so freaky and messed up and you never know who is going to win or how they’re going to win. I’m just really, really glad that they are nowhere near me and hopefully never ever will be.

So far on the site there’s two seasons worth of footage and it looks like there’s going to be 30 episodes in each series. I’ve embedded some of my favourite ones that I’ve watched so far here on Sick Chirpse below, but if you want some more than head on over to Japanese Bug Fights. These ones are pretty mental on their own though, trust me. There are probably some awesome ones over there that I haven’t seen yet though.

This first one sees a really horrific looking white spider go up against something that I can’t even really describe that is way bigger than it – which is kinda unfair – and get pretty much battered and I think its head gets cut off at the end.

5 Places You Should Never Go

How To Catch A Python With Your Right Foot