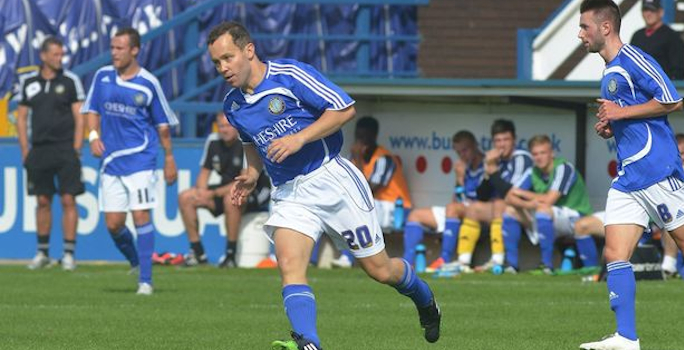 Life-long Macclesfield Town F.C fan and successful businessman James Gorfin shelled out Â£10,000 to play for the team he supports. Unfortunately for James, he got injured after ten minutes.

Money can buy you pretty much anything nowadays. If you’ve got $15 million sitting in the bank, you can blow the lot on an iPhone with a black diamond as the home button or like a lot of billionaires decide to do, you can buy yourself a football club.

Obscene amounts of money gets ploughed into football, whether it be paying players ridiculous wages, buying players for astronomical fees or just the day to day running of a football club, football just needs money to run. One thing that hasn’t been seen before is a club taking a fee in exchange for some game time on the pitch though. Not until now anyway.

James Gorfin is the CEO of some recruitment firm in the Manchester area, he is also a life-long Macclesfield Town F.C fan. Now from what I’ve read about it, James has always fancied himself as a decent footballer and when he got to the age of 40, he decided he wanted to blow £10,000 and see what it would be like to play for his boyhood club.

Now granted, £10,000 isn’t the greatest amount of money in football but you’ve got to remember Macclesfield play in the Conference League (still 100 times better than you’re Sunday league pub team standard but just as far off the Premier League) and it wasn’t a competitive game. So, the deal was done, James was happy, Macclesfield Town F.C were happy, everyone is a winner, right? Wrong.

James got his big chance in a friendly against Stoke City. He was probably relishing the chance of playing against some of the world’s greatest players like Jonathan Walters, Glenn Whelan and Robert Huth but unfortunately for James these substandard Premier League Players didn’t turn out and nor did he if the truth be told.

Merely a few minutes into his pricey first appearance for the club he supports, James was on the end of a crunching tackle that left him a bit sore. Another few minutes passed before a ball was fired across the box, with the chance to go down in folklore with the club he had loved for 40 years and bag a goal, James over-stretched and pulled his groin.

Try as he may he couldn’t carry on and just 10 minutes into his long awaited debut, he had to be substituted meaning poor old James had shelled out £1,000 per minute to play.

James did have this to say about his experience: “I’m limping around and it’s still hurting but a few drinks in the bar afterwards helped me to recover. Before I left, I did mention that if they ever get really short they could give me a ring.. I don’t expect they’ll ever be that short though!”

There are a couple of amateur videos on YouTube of James in action – one of him delivering a ‘defence splitting pass’ and another of him ‘almost scoring.’ I’ll leave it to you to figure out if those descriptions are sarcastic or not. The second video might actually be the one where he pulled his groin although I’m unsure. Should have done your stretches mate.

Footballers Of The World