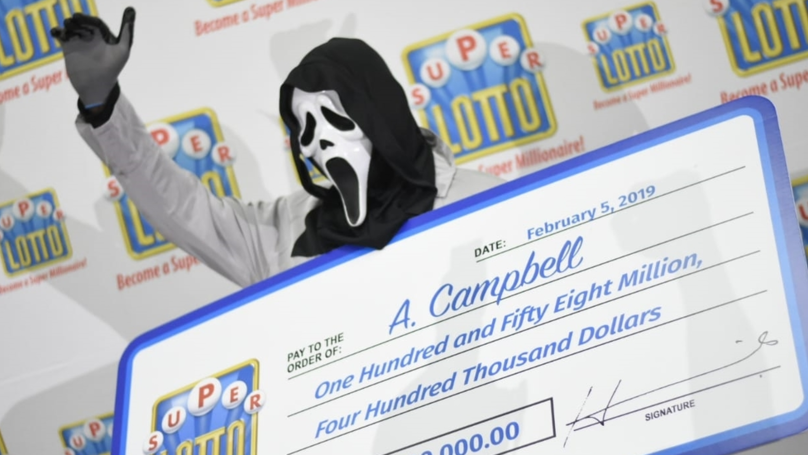 Winning the lottery has got to be up there with one of the best feelings in the world, but the next question you would have to answer is whether or not you wanted people to know your identity or not – it could have a significant impact on your life if they did.

One guy over in Jamaica known only as A Campbell wasn’t keen on revealing his identity to the world at all, but was keen to pick up the giant novelty cheque and so decided on a compromise: he would dress up as Ghostface from Scream to be presented with it. You can’t really blame him as well because he was picking up a cheque worth $158.4 million Jamaican dollars, so you probably didn’t want everyone on the island picking up on that fact, even though it’s not as impressive as it sounds as it’s only the equivalent of £1 million. Still, nothing to turn your nose up at.

Campbell isn’t exactly over the moon about winning the money though, explaining the following:

I looked at my ticket and ran into my bathroom and said, ‘I won! I won!’

From the day I found out that I won, I’ve been sick.

My head hurt me for three days because I was thinking so much, [wondering] if what I’ve been longing for really came true. I had a belly ache for two weeks, sometimes I feel so much pain I forgot that I had won.

I mean I dunno about that, sounds kinda like he’s got some kind of survivor’s guilt there doesn’t it? Hopefully he’ll get over it and be able to enjoy the million quid he just picked up for nothing. Honestly, give me a million quid and see what I would do. Probably at least dress up as someone cooler like the Predator to pick up the money, that’s all I’m saying.

For more of the same, check out the first eight minutes of the Scream TV show. Remember when that was a thing?