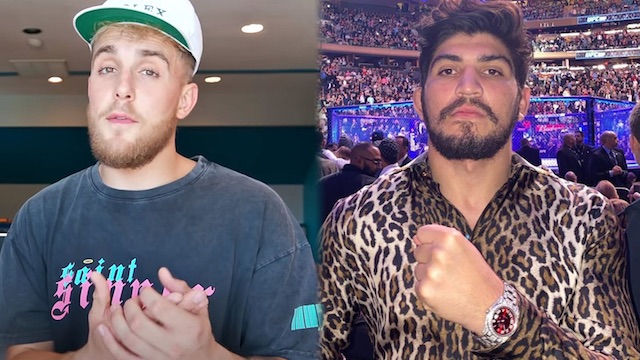 Today is the first day that Jake Paul hasn’t done anything obnoxious in his pursuit of a fight with Conor McGregor, but maybe that’s because people are now accusing him of staging his drive by attack on McGregor associate Dillon Danis.

People started throwing these ideas around because Dillon Danis released a video highlighting his perspective of the attack and it shows a very different story to the one that Jake Paul put across in his clip. You can see that Dillon is clearly laughing with his interviewer Brendan Schaub and even sees Jake Paul approaching ages before he starts throwing water balloons at him.

However, this calm and laid back demeanour during the incident has led people on Twitter to think that the whole thing was staged. Take a look below and see what you think:

Caught the biggest shit talker slacking @dillondanis you gotta check in when you come to La. #GenerousDriveBy pic.twitter.com/460MjnO3F6

I dunno man, that doesn’t seem very staged to me at all? Danis seems a bit shook by the whole event and it’s he’s alway employing the classic tactic of a guy after a fight’s (I know it’s not a fight but let’s just call it one for the sake of this article) happened where he’s really buzzing and just says what he would have done differently/what happened over and over again. Doesn’t seem to me like he was acting at all, but I guess some people think differently. Make up your own mind.