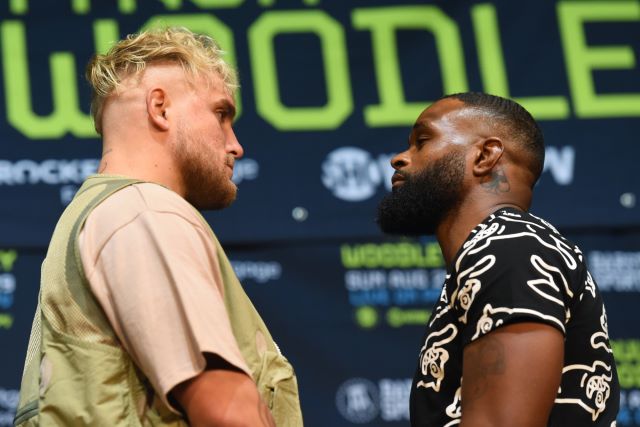 I can’t believe they shook on this.

Jake Paul and Tyron Woodley had their first big press conference to promote their upcoming boxing match on August 29th the other night, and things got rather interesting.

After about 20 minutes of Tyron Woodley calling Paul a YouTuber and fake fighter and Jake Paul calling Woodley a washed up 40-year-old, the two of them decided to have a little wager…

Lol – I’m amazed that either of them took that bet and even shook on it in front of everybody. But do I think either of them will go through with it if they take the L? No chance.

Still, it’s all part of the build-up and a pretty amusing new layer to the fight. We know that Jake Paul turns everything he’s involved in into a circus but at the end of the day, these two will be stepping into the ring and getting it on for real. It would be so embarrassing for Tyron Woodley to end up losing that fight, let alone be expected to get an ‘I Love Jake Paul’ tattoo afterwards. Might people actually start taking Jake Paul seriously as a boxer if he does KO Woodley?

Some might say Jake Paul actually has the advantage. Yeah OK he’s only had 2 or 3 fights, but that’s 2 or 3 more than Tyron Woodley who has only ever competed in MMA and never boxed professionally. It also seems like Jake Paul is way more hyped and up for it than Woodley. I hope I’m wrong but I have a feeling Jake Paul is gonna come out of this one the winner. Guess we’re gonna have to tune in on August 29 to find out.

Guess who’s eyeing a fight with Jake Paul if he manages to beat Woodley? Yup…