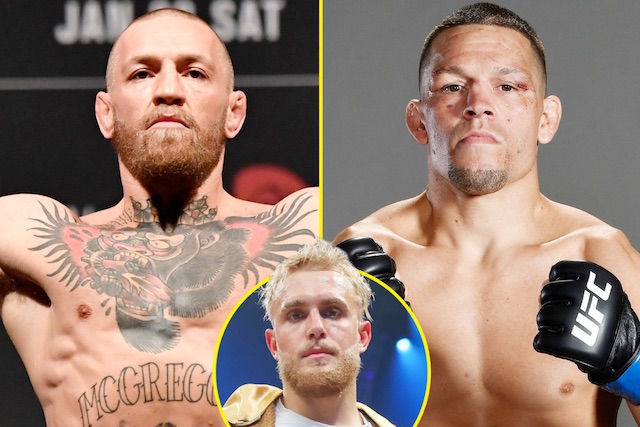 Looking to the big time.

Jake Paul emphatically knocked our Ben Askren within one round in their much hyped boxing match over the weekend and has now swiftly turned his attention to the future, saying that he believes a fight with Conor McGregor is now more likely and that he can finish Nate Diaz within three rounds.

Paul said the following after the fight at the weekend regarding any potential future matchups:

We’ll see,” “There are a lot of people. But honestly, when it comes down to signing the contract, these guys duck. Honestly, we’ll see. The McGregor fight just became more realistic, like I’ve been saying. I just want to do big fights.

Not really sure that ‘more realistic’ necessarily means that it’s actually realistic, but I suppose if Dustin Poirier beats Conor in the summer then he probably won’t be fighting too much in the UFC any more will he? Jake also seems to be angling for a fight with Nate Diaz as he randomly tweeted this on Sunday afternoon:

Fighting talk! Who knows who Jake Paul will fight next, but everyone is desperate to see his ass get handed to him so it seems highly likely that a whole load of people are probably going to tune in to watch it all go down. Even more now after he made such light work of Askren.

For more of the same, check out what Jake Paul said after he was accused of sexual assaulting TikToker Justine Paradise. Not all fun and games for the guy this year.