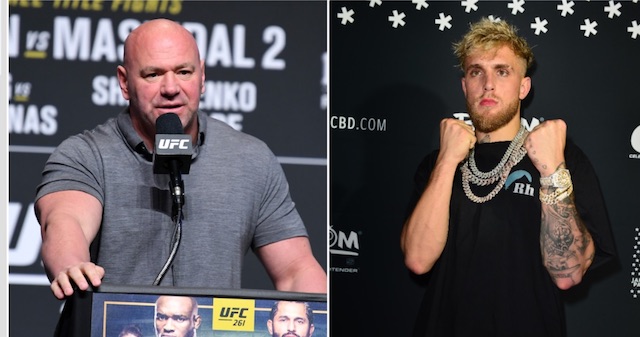 It’s only been a week since Jake Paul knocked Ben Askren out in the first round of their celebrity boxing match, but it doesn’t look as though he’s going to be shutting up any time soon.

The latest target that Paul has taken aim at is controversial UFC President Dana White after White made some rather disparaging comments about the YouTuber following his appearance at UFC 261 over the weekend. He basically said he had no interest in doing business with the guy and called him out for lying about how many PPVs he sold for his fight with Askren:

Dana White reacts to @JakePaul‘s presence at #UFC261 and says he has no interest in doing business with the YouTuber. pic.twitter.com/autW0ae7sO

This kid’s done a good job of putting himself in a place to make some money,” “Good for him. He’s got (the media) talking about him all the time and asking questions about him, got Daniel Cormier running after him – so he’s doing something right.

He knocked out an NBA guy who was 40 years old and 30 pounds less than him, and I don’t even know what to think about the Askren thing. The whole thing is f**king mind-boggling to me. But hey, good for him. Grab that money while you can, kid.

Do you know what would happen to this guy (in the UFC)? He ain’t fighting in the UFC. He’s getting hand-picked opponents, and God knows what else is going on with that whole f**king thing.

Of course, Jake Paul wasn’t going to let someone say this about him and not fire back, so he immediately said the following via his Twitter account:

Yeowch. Talk about shots fired there. I doubt Dana White is going to take that lying down and is almost certainly coming up with some kind of response as we speak. Maybe Paul could box White for his next fight? Now that is something I might actually pay to see.

For more of the same, check out this video Dana White dropped of all the journalists shaming him in 2020. Pretty cool to be honest.