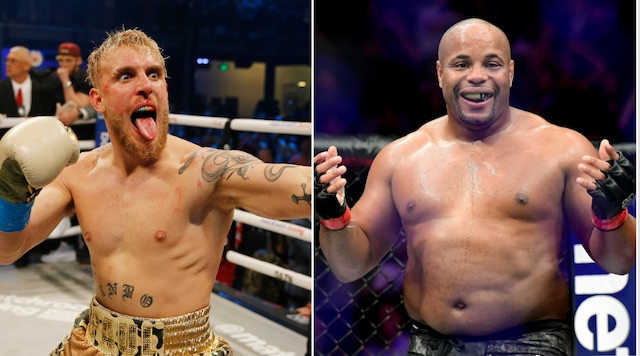 Jake Paul is still (unfortunately) dining out on his knockout win of Ben Askren in the first round during their much hyped boxing match over the weekend – and probably will be for some time – and this sadly means that he’s going to continue to be disrespectful to all retired MMA fighters, with former two weight champion Daniel Cormier the next name on his list.

Cormier was very vocal about his support for Askren in the run up and aftermath of their boxing match on Saturday via his Twitter account, saying the following:

This is absolutely crazy! Come on @Benaskren ! Beat this dude Ass man

I mean the way this dude talked to T- wood makes my skin crawl. All these kids are going to get taught a lesson I swear. And I can’t wait for it, @JLeonLove you can’t fight. Better respect dudes like @TWooodley before he puts his hands on you. He ain’t Ben!

Obviously, Paul was going to hear about this and try and rile him up and it looks like he’s succeeded after he went on his brother Logan Paul’s ‘ImPAULsive’ podcast:

Daniel Cormier (was saying) that’s my boy Ben, he’s gonna beat Jake, he pushed him in the face so he’s gonna win now, chirp, chirp, chirp,” “I knock him out and he’s on Twitter, ‘Ben, are you serious, bro, you went down like that. Ben are you kidding me, I can’t believe you did that to the MMA community.’ Shut the f**k up b***h. I’ll beat the f**k out of your fat ass too, just like Stipe did, Cleveland sh*t. I’ll beat the f**k out of Daniel Cormier.

Hardly that surprising to hear something like that is it? Cormier hit back fairly instantly via Ariel Helwani, saying the following:

This dude would never fight me. I would kill him. Why would I ever fight someone like that?

I’m the guy that’s in the Hall of Fame. I’m the guy that won two world championships at the same time.I’m not gonna punch down to some kid that’s on YouTube that’s, like, ‘Fight me!’ Like, why? What have you done to earn the right to fight me?

I’m just saying, but that sounds awfully like the start of a feud between the two and I can imagine Paul only has one or two more high profile opponents to get through before Cormier becomes a realistic target. And to be fair, an old retired UFC champion who specialised in wrestling might be the kind of guy that Paul might actually sadly end up beating. You saw how those body shots from Stipe took him down in their second fight.

Anyway, hopefully it doesn’t come to that and whoever Paul fights next puts him down and gets him to shut up. You know that’s going to happen eventually and it’s going to be worth it.

For more of the same, check out when Jake Paul said he had early signs of brain damage from boxing. OK dude, sure.