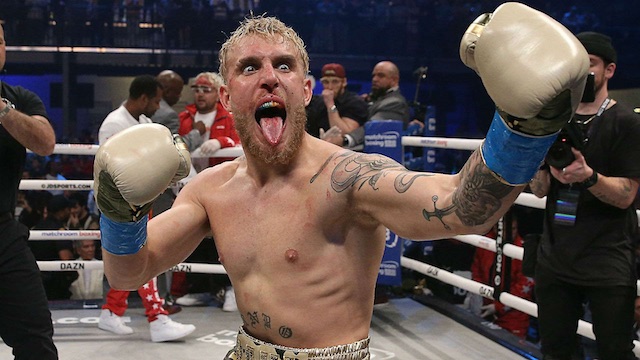 I don’t think I’ve ever seen someone prepare for the biggest fight of their career by being accused of sexual assault and then openly admitting to having early signs of brain damage from being involved in boxing, but Jake Paul just isn’t like other fighters is he?

Yesterday Paul was taking part in a media session for his upcoming fight with Ben Askren on Saturday and decided to reveal that he had already shown signs of CTE from his fledgling boxing career, despite only taking part in two fights. Here’s what he had to say:

.@JakePaul claims he has “early signs of CTE” heading into his boxing match against Ben Askren at #TrillerFightClub.

It’s a dangerous sport. That’s why, when people question my dedication to it, it’s like, I’m showing up every single day,

Like you said, I’ve gone and gotten brain scans and (I) have early signs of CTE.

But, I love this sport and wouldn’t trade it for anything else.

Cool? I don’t really know what he’s trying to prove there by saying he’s got early signs of brain damage – and it might even make it harder for him to obtain a fight licence in the future – so I don’t think there are really any advantages to doing it? It’s not like it makes him look tough or hard, it just makes him look like a dumbass, especially when professional boxers who have had a shit tonne more fights than him aren’t bringing it up.

Hopefully Aksren knocks him out and that’s the end of his boxing career and he doesn’t get any more messed up from it. You gotta think about the poor guy’s brain!

For more of the same, check out Jake Paul trying to explain why he was spotted looting a mall last summer. That was a weird flex.