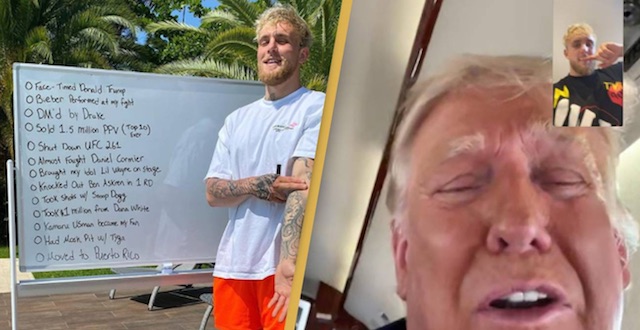 Jake Paul has had a pretty eventful year so far – pissing everyone off, knocking out Ben Askren in one round in a fight that some are labelling as very dubious – and now he’s been granted a FaceTime with former President Of The United States Donald Trump.

Unfortunately – or maybe that should be fortunately – we haven’t been allowed to see video or audio of their inane exchange, but Jake Paul has shared a screen grab of it happening and placed it at the top of his list of achievements for 2021. In fairness to the guy, he’s just some loser celebrity YouTuber that almost everyone hates and he’s FaceTimed a former President, so I guess you have to give it to him. He’s killing it and more people are talking about him than ever. Fair play.

Again, that is a pretty decent list to be fair. I suppose it shouldn’t come to a surprise to any of us that Jake Paul is a massive Trump fan because well, they’re both complete and utter assholes aren’t they? I hope the video of it gets released so we can all laugh at how stupid their little interaction was, but I’ve got a feeling that they were discussing some very important stuff so it might not be. How is Jake Paul going to top this though? We aren’t even halfway through the year yet!

For more of the same, check out when Jake Paul was accused of groping a TikTok superstar. How come that didn’t make his top ten list?