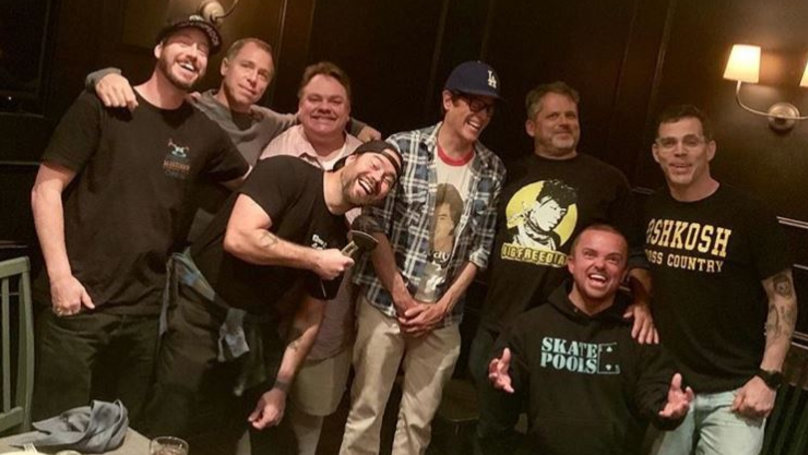 There’s no denying that if you grew up in the late 90s/early 00s, then you thought that the Jackass crew were some of the coolest guys out there and had the sickest lives. Who could forget that time everyone thought Johnny Knoxville had died because he was trying to open a can of beans whilst he was parachuting?

Anyway, the Jackass crew have long since stopped doing cool stuff and being that relevant, but it’s always nice to see and hear what they’re up to when they do reappear – except maybe when it’s Bam Margera relapsing into alcoholism again. Thankfully, Johnny Knoxville’s latest Instagram post is anything but one of those depressing updates, with a whole bunch of the main characters from Jackss reuniting with the director and co-creator of the franchise, Jeff Tremaine.

Take a look yourself:

OK, in case you aren’t sure about who all those people are, here’s a little summary from left to right: Ehren McGhehey, Dave England, Preston Lacey, Chris Pontius, Johnny Knoxville, Jeff Tremaine, Jason ‘Weeman’ Acuna and Steve-O. What a bunch of legends hey?

Of course, the fact that all of these people were hanging out together in what looks like catering on a movie set, has led to a shit tonne of speculation that they might be making a fourth Jackass movie or at least be planning some kind of reunion special or something. Let’s hope it’s fianlly happening this time.

One notable omission from the picture was obviously Bam Margera. For an update on what he’s doing, click here – it’s pretty grim though.