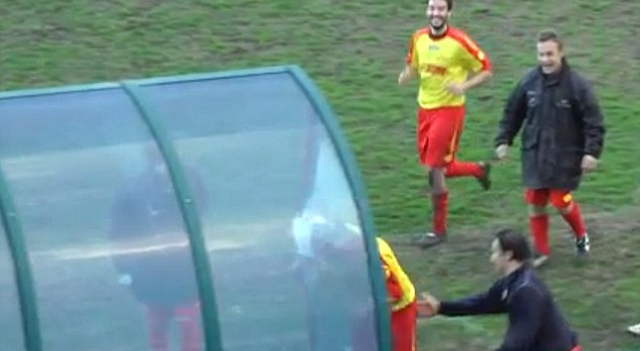 This is the most bizarre football celebration we’ve ever seen, and the referee’s reaction to it is almost as messed up too.

There aren’t many detail pertaining to this clip, but it’s definitely one of the most bizarre goal celebrations I’ve ever seen and thus is definitely worth highlighting here on Sick Chirpse.

The footage comes from an Italian non-league match between Pontilcelli and Riolo Terme over the weekend. Riolo Terme scored a pretty below average goal (it doesn’t look like the Pontilcelli keeper is going to have a career in the big leagues judging by his handling for this one) and the striker who got the tap in went absolutely crazy and steamed off towards his dugout, followed by his teammates.

Once there, he literally headbutted the glass dugout and went straight through it to the other side, in what can only be called one of the most bizarre celebrations in football history. It may even have been premeditated, as his teammates don’t seem that shocked and surprised by it as they might have been if it was completely random.

Unfortunately for the unknown striker, he was immediately sent off following his celebration. I’m not sure why or under what part of the rules he was sent off, or if there’s even a precedent for that kind of stuff but it seems kind of harsh to me. Even more harsh on his teammates, who went on to lose 3-1 despite leading with that goal.