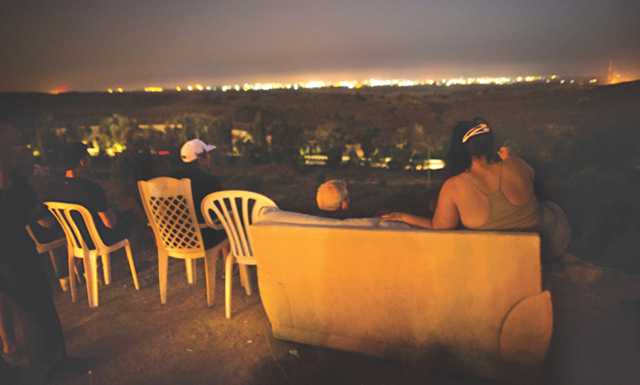 What is the world coming to?

While Danish journalist Allan SÃ¸rensen was in the southern Israeli town of Sderot trying to find a place to watch the raids on Gaza, he came across this group of young Israelis chilling out on a hilltop, smoking shisha and munching pop corn as they witnessed the carnage.

Sderot is itself a frequent target of Hamas rocket attacks, which has led to this mentality:

We are here to see Israel destroy Hamas. Honestly, look at the people around you. They live in this town and must deal daily with being shot at. We sit and look at Israel crating peace.

As a journalist, I was looking for an area from which I could get an overview of the Israeli air strikes on Gaza, in order to better understand what was going on. This evening, it was really intense and s I’d heard people speak about this hill, I went there. As I came closer, I was surprised to see that lots of cars were parked halfway up the hill. Once at the top, I noticed that there were already some 60 people sitting and standing. It was surprising to see them relaxed on their folding chairs. Some were smoking water pipes, others were snacking on popcorn as if it was an open-air cinema.

There were people aged between 60 and 70 but also young people. On the other hand, I didn’t see any children. I think that’s got something to do with the fact that the area isn’t secure. A few days before a rocket hit the lower part of the hill which is in range.

@allansorensen72 @Habibiline morality of a people so skewed that murder is a public spectle. an astonishing thing to see in this day/age?

@MathiFryy I’m sorry but people, any people, celebrating death anywhere is abominable. Nothing to do with this community or that. Period.

@allansorensen72 If this is true then God help us all. What’s become of the human race?

This follows a crazy week where three Israeli teenagers were kidnapped and murdered as they hitchhiked home, followed by a revenge attack by a gang of Israeli youths who kidnapped a Palestinian teen and burnt him alive.

International appeals for cease-fire and peace talks continue to go ignored by Israel.