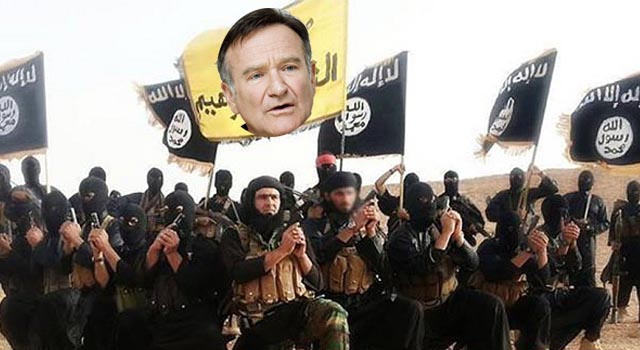 In case you haven’t been on social media today and haven’t spoken to anyone at all today, then you will have heard the sad news that Robin Williams has passed away at the age of 63 from an apparent suicide. Judging by my social media feed today he wasn’t just loved by a few people, but by everyone in the whole world so it truly is a sad day in history when someone who brought such joy to so many falls victim to a terrible condition like depression. RIP dude.

Bizarrely though, it seems that when I just said everyone in the world it actually related to everyone in the world, including people that actively behead children, women and anyone who doesn’t follow the same religion as them. Yes, I’m talking about ISIS (or the Islamic state as they are now called) who believe that if you aren’t a Muslim then you either have to convert or be killed, usually in the most brutal way possible. They’ve been all over the news recently for ethnic cleansing and are basically some of the worst people in history due to their methods – even Al-Qaeda have severed ties with them due to their unrelenting brutality. If that isn’t bad enough, they’re also a group that have claimed to have recruited a terrorist called Osama bin Bieber.

Of course though, even though their beliefs and methods are bordering on the maniacal they’re all big fans of Robin Williams – and in particular Jumanji – and were quick to jump onto Twitter to express their regret at his death. Obviously this is completely bizarre behaviour because he clearly wasn’t a Muslim and if anything was a symbol of Western culture which they despise and actively reject by pretty murdering anyone involved with it they can get their hands on. They also probably haven’t seen Williams’ stand up routine about jihadists below which actively rips the piss out of them:

The world is a strange place, especially on a day like today. Or maybe some people are just dumber than others. Check out the original tweets and some other ISIS supporters’ attempts to justify them below: