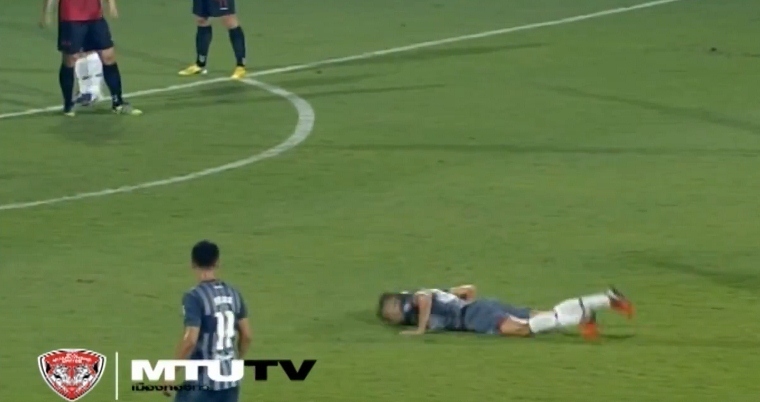 There’s no other way to describe this, other than you have to watch it because it’s the stupidest free kick you’ll ever see. You’ll know what I mean when you see it.

I think most of you will agree that when you’re watching the football – kicked back with a beer in hand, your sweaty tits hanging all the way out and your breath smelling like the lint between a tramp’s toes – and the game you’re watching is a particularly boring one that you’re only watching because it’s an excuse to have a beer and sit there with your tits hanging out, when a free kick is awarded you feel tingly all over and kinda cold and stimulated and ready for anything. Like a lone piece of jelly trembling away in the fridge.

Because everyone  loves free kicks. They’re an art form, like perfecting the hugely under-rated and un-noticed nose picking trick in the office. My record for the nose pick is 3 seconds and my fingers looked as if I’d plunged them into a bowl full of mushy peas afterwards. Class. I was happy for the rest of the day. But, anyway, about free kicks. They’re how Beckham made his name. Be honest, without free kicks he wouldn’t have been half as good and would probably be sinking away in a pitch in a thriller on a boggy Wednesday night in the Blue Square Premier or something. Or he’d be fat as hell and would be one of those pointless football coaches who dunno shit and are short of breath after speaking for more than 5 seconds. Without free kicks, I doubt very much that Beckham would be such a cool guy as he is now and he certainly wouldn’t earn £1.85 a second as he is at the minute. But, free kicks do exist and that’s all that really matters. If they didn’t, football would be really boring.

One of my all-time favourite free kick takers was Roberto Carlos. It’s an actual fact that every pitch he played on had to be stretched for 7 miles beforehand just so that he could complete his run-up. He may not have been able to tackle for shit but he was one of the best free kick takers around and he always made it into my team on FIFA ahead of Mikael Silvestre who was only in my team because he looked like a Space Raider crisp. Here’s one of Roberto’s free kicks so you can knock one out over it. Fast forward to 40 seconds:

There have been loads of quality free kick takers around in professional football, and there always will be. I remember Ronaldo notching a few before he left Man United and Joe Cole was pretty decent before he became fat. Leighton Baines is one of the best around at the moment, I think, even though he’s got 70’s smut sideburns. But there are really bad free kick takers, too. Players who think they can curl a ball like a Sunday morning hangover poo but are actually of much more use standing on the sidelines and shouting abuse at the opposite team and generally acting like a Millwall fan-thug. Here’s a really bad free kick:

â˜› Check This Out Next: Worst Free Kick Ever

Yeah, I know. Embarrassing, right? That guy couldn’t have had any pussy for weeks after that one. Even the gran that Rooney shagged probably said no. But here’s a free kick that is, undoubtedly, the stupidest free kick I’ve ever seen. I really dunno what the guy was thinking unless it’s some sort of Macedonian dance because he’s actually Macedonian and is called Mario Durovski and he plays for Muangthong United in Thailand. The ‘Thong were up against South Korean side Gyeongnam FC and I can only assume Muangthong were hammering their South Korean counterparts because you wouldn’t do this if you needed a draw or a win, surely?

Here it is. The stupidest free kick ever:

â˜› Read Next: Most Bizarre Free Kick Ever