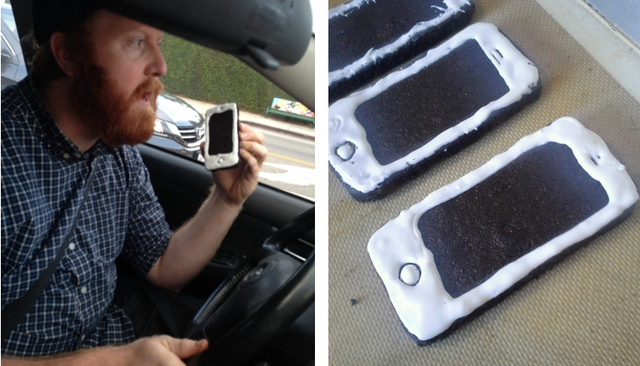 This seemed like the perfect plan, only it wasn’t.

Stand up comic Randy Liedtke came up with what seems like a brilliant idea on paper over the weekend to piss off the cops. I’m not sure why an American would want to piss the cops off – they’re notorious assholes over there – but as far as plans go this seemed pretty infallible. Until he actually tested it out that is.

The idea was to bake cookies that looked like iPhones and then ride around on his car pretending to talk on them. The cops would then get pissed and pull him off, and then he would tell them that he wasn’t actually talking into an iPhone but instead was talking into a cookie that looks like an iPhone. He would then get off scott free. Or get sent to a mental institution. But the plan itself is pretty foolproof right? Well, kinda.

You can see what happens in a bunch of tweets below, although obviously it’s not exactly clear as to whether all this is true or not because it’s Twitter and there isn’t exactly any evidence for it.

â˜› More iPhone Pranks: iPhone Glued To The Floor Fools Most Of Amsterdam

Just saw a police car going the other way. Gonna turn around and see if I can catch up and drive by it. #iphonecookie

Took a bite out of the cookie. He was so confused and angry. Told me to hold tight, he is back in his car now.

Says I have a warrant for unpaid parking tickets? Making me go with him. Letting me text gf but Im tweeting this. pic.twitter.com/vv89MUqg0Q

Wasn't worth it. I'm an idiot… No more iPhone Cookies pic.twitter.com/MbQZq0UA9O