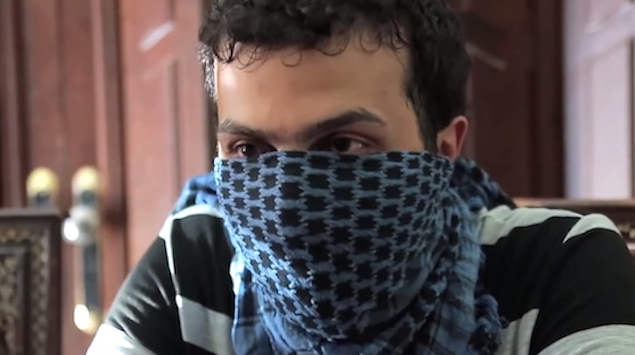 This is allegedly the first American interview with a captured ISIS fighter.

OK, I’m gonna put this out there straight away by saying I’m not sure if it’s 100% legit as the video is full of propaganda and it doesn’t actually seem like it’s that serious with its presentation – in fact it’s pretty much the opposite and completely sensationalise.  As we report on so much ISIS propaganda though and because it might be true I think it’s worth putting out there through the site and for you to make your own minds up.

In the video below the captured prisoner says a lot of interesting things – there are more American women than men fighting for ISIS, they’re all rich, he took part in a 30 day training camp, he now feels betrayed by ISIS – but you have to rely on the translation in the video so there’s no real authenticity to test if it’s actually true or even if it slightly resembles what he’s saying. Make your own mind up.

Here’s the background on how he was captured and the interview came about, from the video itself. Next time though, here’s a tip for whoever made this video: don’t present it like this if you want to be taken seriously and win the social media war.

We sat around the living room of Sheikh Husam Atrash, commander of the Jaish al-Mujahideen brigade of the Free Syrian Army, interviewing him by the light provided by some LEDs powered by a car battery. The power was off in the Western countryside of Aleppo, as is usually the case since the start of the revolution. “Do you have any ISIS prisoners right now?” I asked. The Sheikh nodded. “Can I interview one?” The Sheikh nodded again.

“Yes. I give my hearty consent. We have nothing to hide.”

The next morning, we were ushered into one of the brigades bases–a grand vacation mansion abandoned by it’s wealthy inhabitants at the start of the revolution. An FSA fighter sporting a mullet and an AK-47 led in the prisoner–a young man who looked more like a Williamsburg hipster than a murderous jihadi. He was sheepish, fidgeting as he waited for us to set up.

The fighters wouldn’t let us roll camera until the prisoner’s face was covered and would give us only an alias for him–“Abu Abdullah.” We were told he was from Saudi Arabia (and when an Arabic expert reviewed our footage, he confirmed that the man was speaking in a Saudi dialect.)