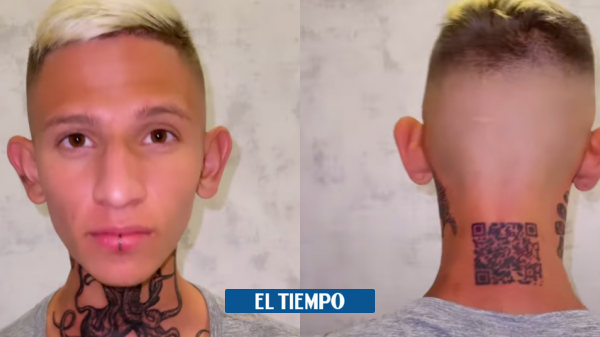 Have you ever done something really cool when you’re out and about in public and then worried that everyone who just saw it won’t be able to track you down on social media and be linked to you for eternity?

I can’t say that I have personally, but if you’re an influencer yourself then it might have been an issue for you and this is presumably why Mauricio Gomez from Colombia decided to get a QR code tattooed to his neck, so that people could just scan him when he was walking down the street and go straight to his Instagram account. Gomez – or La Liendra as he is known on social media – uploaded a video of his girlfriend scanning his neck and then being taken straight to his account a couple of weeks ago:

Neat. Except that it looks like it doesn’t work any more.

La Liendra was visiting his friend local plastic surgeon Carlos Ramos as he needed to borrow his Porsche for some social media content and when Ramos tried to scan his neck, nothing happened.

Whoops. It’s unclear at the moment if the QR code doesn’t work because the ink has faded or because La Liendra’s skin was scrunched up or something, or whether he was just faking it from the beginning.

Either way though, it doesn’t work so he’s gonna look like a bit of an idiot for the rest of his life when people scan his neck and don’t even end up going to his Instagram page. Sure he probably doesn’t really mind that much though – he’s currently sitting pretty on 5.4 million followers and that number is probably only going to get bigger. I guess the rest of us can laugh at him a bit though hey?

For more of the same, check out this 13 minute supercut of influencers in LA doing their thing. So lame.