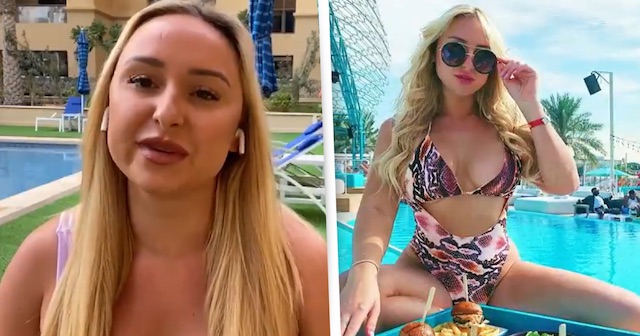 This isn’t going to go down well.

There’s been a lot of heat in the past week or so after it was decided that influencers were exempt from travel restrictions as their job involves travelling around the world to make videos in exotic locations and I doubt that this interview with fitness trainer Sheridan Mordrew is going to do anything to to alleviate this.

Mordrew recently travelled over to Dubai on an essential work trip during the pandemic and argued that she wasn’t encouraging her followers to travel during it, but instead motivating them to continue their at home workouts by performing them in an exotic location like Dubai. She was speaking to Holly Willoughby and Philip Schofield when she said the following:

‘My job is to motivate people’

Sheridan has been in Dubai since the start of January, on an ‘essential work-trip’ to provide sunny content for her followers.

Following an online backlash, she joins us today to defend her position.

My job is to motivate people. If I was gonna be lazy, if I was gonna just sit back. I could have stopped providing free workouts on my Instagram and thought ‘you know what I’ll just wait til gyms open.

My job is to help people get fit and be motivated, whether that’s in a house or it’s in Dubai.’

I think in a world where you can be anything, be kind, and I think a lot of people forget about that.

It’s not that I’m trying to influence anyone to come out, it’s just I’m doing my thing. If anything I’m getting people moving in the house, I’m not saying lets get out let’s go outside. The purpose of what I’m doing is to motivate people

I don’t really think anyone’s buying that are they, as she literally says at the end of the interview that she could probably have done all this in the UK. Sure, I understand that people are probably more likely to tune into her channel if it’s in a glamorous setting rather than in her semi-detached house in Essex somewhere, but it’s hard for people not to resent her as it’s very easy to see that the trip isn’t essential.

Still, if it’s allowed in whatever version of the rules are out this week, then you can’t really blame Sheridan and all the other influencers out there for taking advantage of them. You might as well if you can, right? Real blame (again) has to lie at the hands of this shambolic government, but let’s not get into that again hey?

For more of the same, check out this 13 minute behind the scenes look at influencers in Los Angeles. Really is as cringeworthy as it sounds.