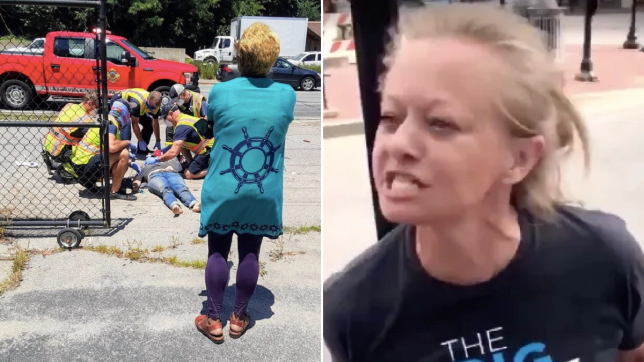 The word ‘racist’ gets bandied about quite easily these days, but I think anyone with eyes and ears will agree that infamous Asheville, North Carolina woman Rachel Ruit was a genuine, 100% bona fide racist, and she did not care who knew it.

According to the Metro, Rachel has been killed this week after accidentally being struck by a fire truck.

This racist (an actual racist) woman got run over by a fire truck today. pic.twitter.com/H35PPTbp8q

Eyewitness Jonathan Rowell captured the photo in the featured image above and wrote the following on Facebook:

Some of you probably saw the video of a white lady near the Vance Monument screaming “Ni**er, Ni**er” seeing as how the video went viral on Facebook…

I just witnessed the same lady from that video accidentally step out into traffic on Patton Avenue, going towards downtown Asheville, as she was walking with traffic coming from behind her…the Asheville Fire Department truck that you see in the background is the vehicle that she stepped out in front of..

And that 1 person was the Black lady standing right in front of me in this picture. Praying & praying & praying and in tears for coincidentally the same woman who was yelling the N word with such hatred in her heart. Just sayin.’

Damn, that’s deep. From the reaction on Twitter, let’s jut say people don’t exactly feel bad about Rachel’s demise and you can understand that given that she was an awful person, but a part of you has to feel sad for the fact that any human can end up being so tragically hateful and hopeless. Whatever was going on in her brain probably came from a fucked up childhood and some extremely negative experiences throughout her life. Not excusing any of her behaviour of course (she also apparently sexually assaulted a teenage girl once), just lamenting the fact that someone could end up so insane and evil in the first place.

To watch an eye-opening video of the racist abuse one Asian girl received over Omegle following the the start of the pandemic, click HERE.