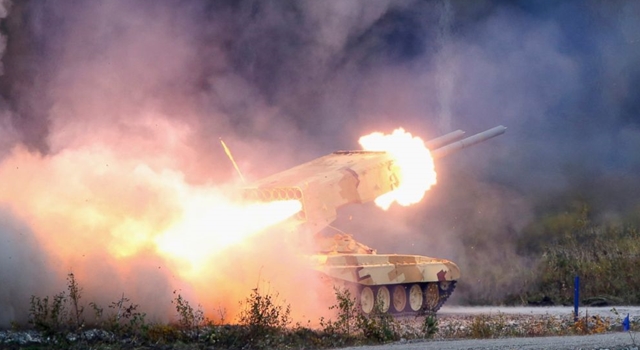 Ukraine vs Russia is still going strong. Here’s some mad footage of rocket fire in a housing estate.

The whole Ukraine vs Russia thing has fallen out of the media in the UK. That’s the way news goes though isn’t it? They show something as it kicks off, then in an attempt to keep viewer’s attentions they show them the next shiny thing that’s happening elsewhere. To be fair, there’s so much hideous stuff going on in the world you could never show it all.

The beef in Donetsk, despite our media blackout, is still going strong as this footage shows. In a nutshell: Russia wants to own Ukraine again and bring them back to their ample Soviet bosom. Russia is attempting to achieve this land grab by aiding pro-Russian rebels in Ukraine who want to be Russian again. But, of course, Russia says it is doing no such thing, they’re 100% innocent and would never dream of providing the Ukrainian rebels arms and support. No Sir.

The two sides have been in talks recently and they managed to decide on a cease-fire; this footage taken on Mondays shows that the cease-fire hasn’t worked out that well.

The video is shot by a mother and her young daughter. Apparently the little girl says “this is beautiful” before getting a “Ssshhh!” from her mother. Imagine trying to get some shut-eye in this neighborhood? Now you can see why Ukrainian politicians are getting dumped into rubbish bins by angry mobs: