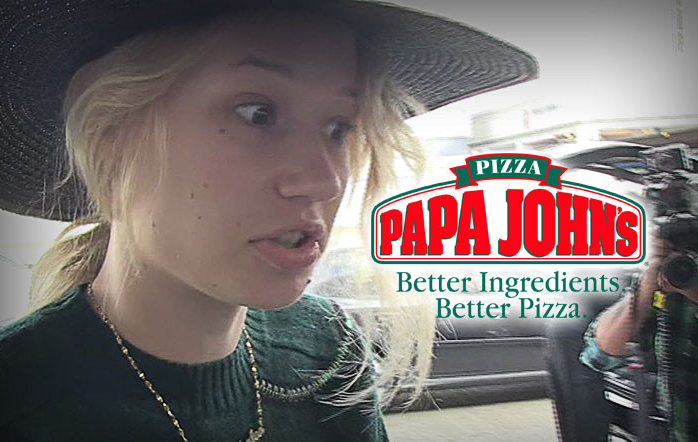 It’s kinda crazy to think celebrities order pizza, and when something like this happens you can see why it’s a bad idea.

Iggy Azalea ordered a Papa John’s pizza to her house over the weekend, which is something any regular person might do over the weekend. Quite why they would order Papa John’s though is a bit of a mystery – I mean what is with that dipping sauce, it’s totally gross, right?

Anyway, due to the fact that Iggy Azalea is a massive celebrity who should probably have her assistant or someone pick up her pizza for her rather than come to the door to get it herself, the experience didn’t turn out the way it would have if it had been me or you ordering a pizza. Following the drop off of the pizza, Iggy started receiving a whole bunch of text messages and calls off numbers she didn’t recognise, like the one below:

@PapaJohns I ordered a cheese pizza but instead I got tons of calls and messages like this one. pic.twitter.com/fgKhydivXb

It turns out that the Papa John’s delivery driver had given out her number to all of his family and friends for some reason. I don’t even know why he would think that was a good idea – did he actually think that Iggy would want to be friends with his friends if they barraged her with texts and calls? – but he did it nevertheless which basically led to Iggy being harassed all weekend.

She claims that she contacted Papa John’s and offered to check out a lineup of their drivers so she could identify him and he could be fired for his indiscretions (although that does sound like an asshole celebrity move it is also a pretty dick move to give out someone’s phone number once you’ve delivered them a pizza) but Papa John’s apparently refused to go along with this. Instead, Iggy took it to Twitter and told the whole world about it, naturally giving Papa a bad name.

There’s no word if there’s been any resolution to the conflict but you can expect this to get worse before it gets any better. Just another problem Iggy Azalea has to deal with, along with her inability to lip sync properly.

. @PapaJohns was my favorite pizza but the drivers they use give out your personal phone number to their family members.

You know, to protect their privacy… Too bad they don't value the privacy of their customers also. #DamnShame

@PapaJohns and this is all your supervisor has to say about it #ProfessionalAsFuck pic.twitter.com/kyQMWQADSq

@PapaJohns I don't think data breach is funny. I expect you to contact me to explain how you are going to rectify your breach

@PapaJohns of my personal information in a satisfactory and professional way or lawsuit will be filed.