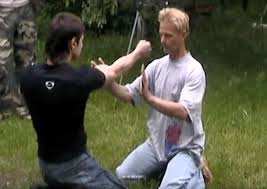 That was never going to work.

By now, people should really know that it’s not a good idea to pick a fight with anyone who is a trained MMA fighter because there are so many videos of people getting their asses kicked by them floating around the internet.

But unfortunately most people are absolute fucking idiots, so they’re still going to do it. In the video below, some guy calling himself an ‘energy master’ is trying to mess with seven time Ukrainian martial arts champion and stuntman Alexandr Litvinenko, saying that he’s going to create an energy shield that he won’t be able to punch through.

The guy actually manages to block the first punch and slap Alexandr in the face, but after that it’s no more Mr Nice Guy and he beats the shit out of the dude for getting cocky in the first place. Unlucky dude – your energy shield isn’t going to work this time:

Yeah he doesn’t look too happy about getting the shit slapped out of him there does he? Serves him right for calling himself an ‘energy master’ in the first place.

Alexandr said that the guy asked him to simulate a punch to the face so he could display how he would block it non violently. After he slapped him though, Alexandr decided to teach him a lesson. Can’t say I blame him.

For more MMA fighters kicking the shit out of people trying it on with them, check out this 10 year old battering the school bully. Ruthless.