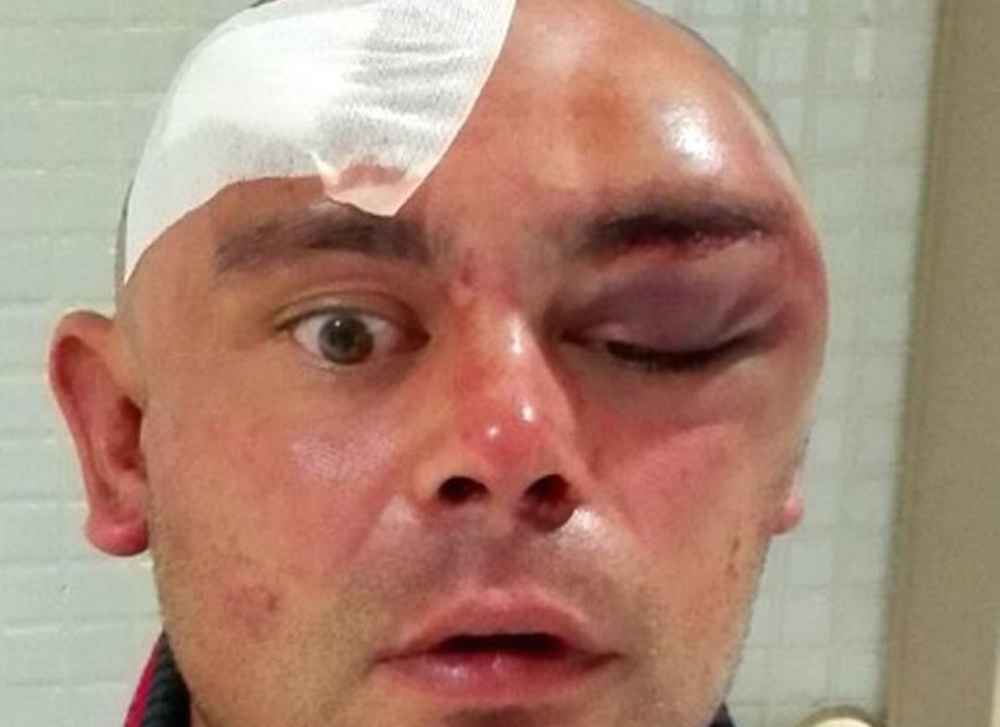 His rabid attacker gnawed at his face, leaving him looking like this.

DJ Kenny McSween was savagely attacked for 20 minutes by what he described as a ‘human cannibal’ outside his Ibiza apartment block earlier this month in which the offender pinned him down and gnawed at his face. The attack was so prolonged that the ‘cannibal’ even had time to take off his jacket and wipe sweat from his forehead before continuing the assault.

Kenny himself has absolutely no idea why the attack occurred on September 20th at 6:50 a.m. after he arrived home from a night DJing. To make matters worse, when the police did eventually arrive, they handcuffed Kenny and let his attacker go:

I honestly thought he was going to kill me. I feel like I’ve gone 12 rounds with Mike Tyson.

My face swelled up like a balloon and I was dripping with blood from where he bit me.

The sound of him biting me still haunts me – he was growling like a wild animal.

I have no idea why he did it. The police told me later he suspected I didn’t live there.

But he went well beyond any reasonable use of force to detain me. Once he started punching me he didn’t stop until the police arrived.

He approached me at the entrance to my apartment. He asked me what I was doing there and I said I live here.

At that point he said he was an officer and pushed me against the wall. I managed to get away.

When I returned to find out what was going on though he subjected me to a savage beating.

When the cops arrived they handcuffed me and kept me on the floor  and let my attacker go. They wouldn’t even give me a glass of water.

It’s got so bad that I’ve had to return to the UK because I genuinely feared for my life.

There are no details about the identity of the attacker or any clues, save for a woman who appears during the attack and grabs Kenny’s possession’s off the floor. Following the attack, Kenny was given seven stiches, X-rayed and received pain relief.

He was interviewed by Guardia Civil, the Policia Nacional, and the local authorities but has received no information on the case from any of them. The attacker was allowed to go free once he gave his details to the police at the scene.

This seems like a completely messed up situation. On the one hand, it seems like Kenny was just the victim of bad luck as he was beaten up and mugged, but on the other that really doesn’t require the attacker to gnaw at his face like a cannibal or brutally maul him as much as he did. I would suggest that he was a victim of the bath salts attacks that happened a few years ago which had elements of cannibalism associated with them, but the fact that the dude was able to give his details to police afterwards implies that he wasn’t completely off his face like someone on bath salts would be.

Either way it’s completely screwed up and you have to feel sorry for Kenny. It doesn’t seem like any of the local police are being particularly helpful about it either, so my only advice is to be careful if you’re heading over to Ibiza any time soon, because this freak is still out there and could target you next. Watch out.