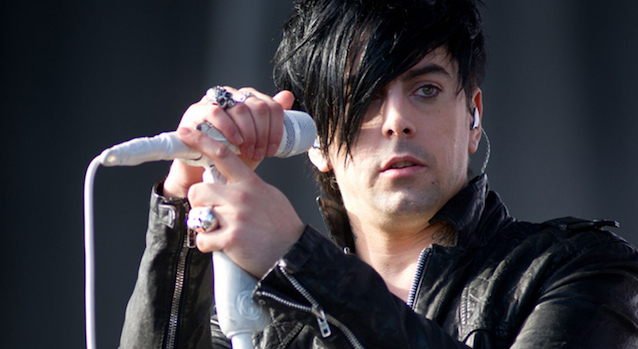 Ian Watkins changes his plea at the last minute as his court hearing begins and the full extent of his perverted begins to be uncovered.

I don’t think anyone saw this coming. Ever since he was arrested almost a year ago over suspicion of conspiracy to rape a baby, actually and a bunch of other disgusting sex related crimes, Ian Watkins has vehemently denied all the charges against him.

His trial started today at Cardiff Crown Court and it looks set to be over fairly quickly as he has pleaded guilty to most of the charges put to him – although critically he did deny raping the baby, but did admit to attempting to rape it, not that that is much better. The baby was said to be that of one of the other two women on trial with him, who cannot be named for legal reasons.

Here’s the information copied from the live feed of the trial. Obviously this is a pretty sad day for everyone involved with the band -from the fans to the record label – but probably even sadder for everyone hearing about this in general and especially those directly affected. More updates when they come.

Ian Watkins has pleaded guilty to a range of child sex charges, including two counts of attempting to rape a baby.

The 36-year-old rock star also admitted conspiring to rape another child as he dramatically changed his pleas on the day he was set to stand trial at Cardiff Crown Court.

His two female co-defendants also admitted a string of sex abuse charges against their own children.

Sally O’Neill QC, on behalf of Watkins, said while the musician claimed he “cannot remember” the attempted rapes – which were captured on video – he wanted the charges put to him again.

Watkins, who stood in the dock wearing a grey suit over a white shirt and dark tie, appeared ashen-faced as the charges were read out.

As the counts were put to him, Watkins repeatedly looked to his legal team as he replied.

Watkins, with his hands clasped in front of him, rocked back and forth as he also admitted sexually assaulting a child aged under 13.

He also admitted aiding and abetting a female co-defendant to sexually assault a child under 13.

The singer, who has sold 3.5m records, looked at his feet as he admitted conspiracy to rape a child aged under 13, while his voice faltered as he quietly replied “guilty” to a charge of conspiring to sexually assault a child under 13.

He also pleaded guilty to two counts of taking indecent photographs of children dating back to 2007 and 2008.

Watkins also admitted possession of indecent photographs of a child and possessing extreme pornography depicting a person engaged in a sex act with an animal.

The musician, from Pontypridd, will be sentenced at a later date.

A 24-year-old woman, who also cannot be named, pleaded guilty to sexually assaulting a child aged under 13 by penetration.

In court, prosecutor Chris Clee QC has described Watkins as a “determined and committed paedophile”.

The court has been hearing how Watkins recorded the attempted rape of a very young child in a hotel room in Shepherds Bush, London, in April 2012. He also filmed himself abusing the child with alongside the child’s mother inside a hotel where the band were staying.

The court is now hearing details about the case relating to Ian Watkins that are too graphic to be published.