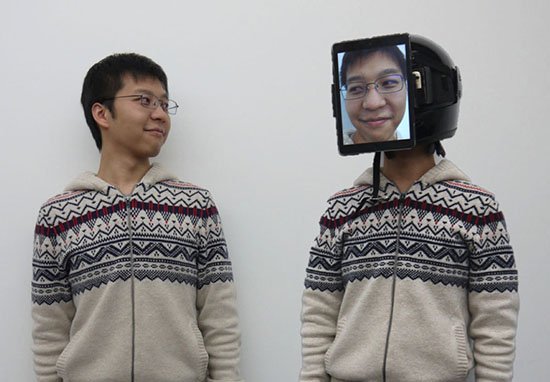 This is apparently a real thing now.

Ever wanted to attend a party but can’t be bothered to peel yourself off the couch from the latest Netflix series that you’re currently bingeing?

Traditionally this hasn’t been an option because well, how could it be? But now thanks to a company called Chameleon Mask you can hire a surrogate to head to the event in your place wearing an iPad over their face  so you can do all your talking from the comfort of your own home or wherever else you might find your actual body residing.

For some reason they’re calling it the ‘Human Uber’ (doesn’t really make sense as an Uber is a taxi and this isn’t a human taxi?) and it was debuted at MIT Tech Review’s EmTech conference in Asia earlier this year. Here’s what Chameleon Mask had to say about their product:

By wearing the mask, we can be someone else and also someone can be our surrogates. The remote user can not only communicate with people who are not in the same place but also communicate physically by making direction such as body gesture with surrogate’s limbs.

The idea is very simple that the remote user borrows the someone’s body and replace the face to show his presence.

However, how do people judge the person in front of them as “the right person”? Can we judge if the surrogate with similar height, physical size, and dress the same way as the remote user?

We conducted the feasibility test of the concept. Surrogate wore the mask and went to the city hall to take a resident card, or became a grandchild and met with her grandmother. As a result, people tended to regard a person who had masked the as “the right person”. How do we judge a person as “the right person”?

On the other hand, what will happen if we wear a mask of another person? What kind of feeling is made by the experience to lend our bodies and be teleoperated?

People around you will talk to the remote user shown the display. However, we may be touched as a remote user’s body.

Apologies for the broken English but I think you get what they’re saying right? Although if you’re like me you probably can’t really believe that this is an actual thing and people are reacting to it in a positive manner – just how are these ‘surrogates’ willing to walk around as literal faceless nobodies doing the bidding of someone else controlling them whilst they sit on their butt doing nothing? Is the pay that good?

I can understand why someone might wanna not attend something that they can’t be assed going to but still kinda wanted to show up to in order to network or whatever, but I’m not really sure if this is the answer. It’s way too creepy for me – I don’t wanna go to a party and talk to someone’s face on an iPad on the body of someone who isn’t allowed to speak. That’s some crazyass Blade Runner shit or something. It’s a no from me.

For more robots, check out this robot that was gifted with intelligence and immediately decided to kill itself. Lol.