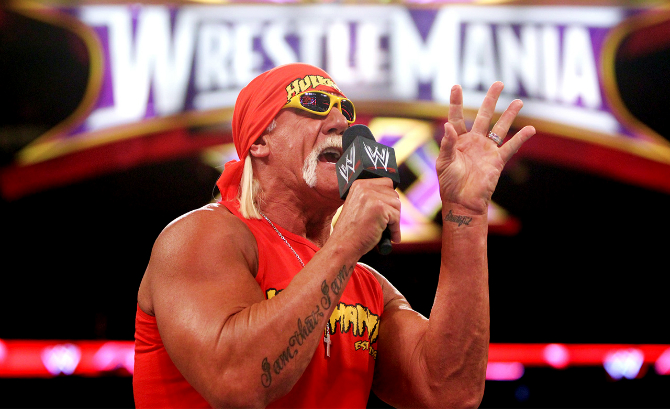 Is Hulk Hogan making his big wrestling comeback at Wrestlemania 32? He seems to think so, despite the fact WWE wants nothing to do with him.

It’s been what, 2 weeks since Hulk Hogan was exposed as a massive racist in those leaked tapes? That’s long enough for the world to forgive him, right?

To be honest, it was a bit harsh of Vince McMahon and the WWE to erase everything involving Hulk Hogan from their archives following the leaks, but you can understand why they did it; they are a publicly traded company after all and don’t need to be associated with racism and whatnot. Back in the Attitude Era though, you know this would have led to a massive Hulk Hogan Vs giant black dude match at Wrestlemania. Shame really.

Anyway, somehow the Hulkster thinks this will all blow over by Wrestlemania 32 next year in April, which is taking place in the enormous AT&T Stadium in Texas.

He dropped this message on Twitter earlier (since deleted):

He then had a proper think about what he’d just said and remembered that WWE currently wants nothing to with him, so back tracked a little bit:

I will explain again I "WAS" aiming for 32 but I am training like there is still something big ahead in my future,only love 4 my maniacs HH

The reality is that WWE is probably going to welcome him back eventually, as they should. After all the guy did so much for their company and the wrestling business in general.

One last Big Leg Drop and 3-count for Hulkster at Wrestlemania? I think he deserves it even though he was a little bitch and tried to sue us a few years ago. Water under the bridge Hulk.