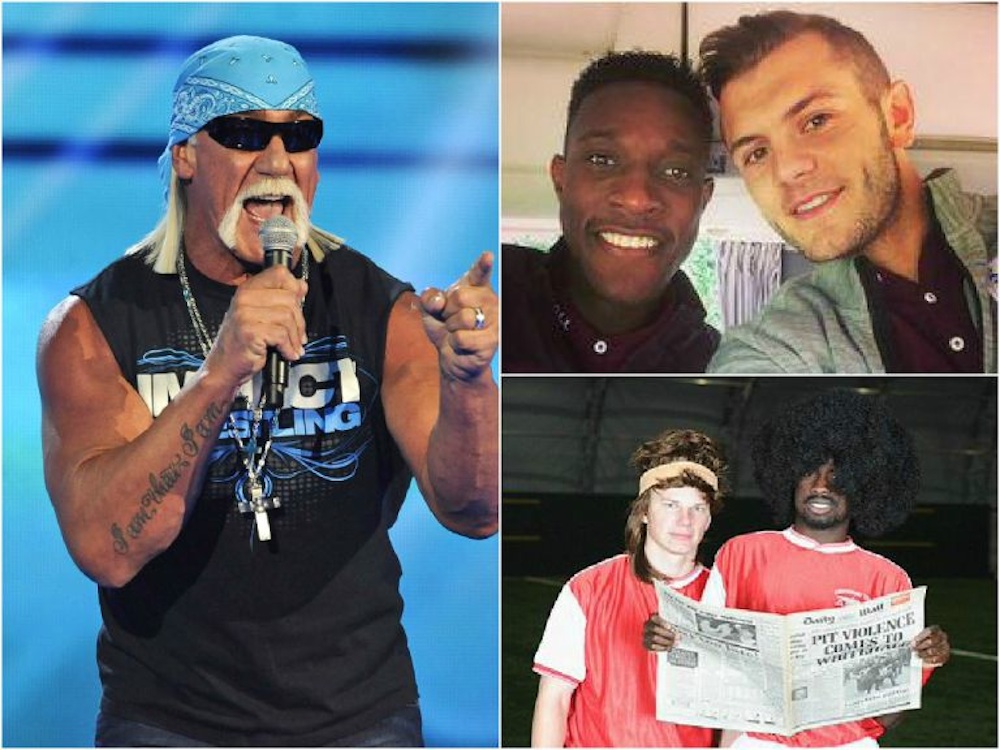 He’s retweeted pictures of Danny Welbeck, Emmanuel Eboue and Kolo Toure, Katie Price and the Sidemen seemingly with no idea who any of them they actually are.

Oh dear. It hasn’t been the best weekend for Hulk Hogan. We told you earlier today that he had been fired from the WWE after his racist rant was heard by the masses and he was dissed by New Jack, but things have got even worse for him now as he’s been trolled massively on his Twitter account and made to look like an absolute tool.

Many people have been tweeting Hulk messages of support about how they don’t think he’s racist and he’s been retweeting these as you do to let everyone who follows him know that people are still behind him. Unfortunately for him though he’s also managed to rewteet a bunch of messages from trolls who have included pictures of Danny Welbeck, Jack Wilshere, Kolo Toure, Martin Keown, Andrey Arshavin, Emmanuel Eboue, Katie Price and The Sidemen.

Hulk is basically retweeting pictures of black footballers (along with their white teammates) and black celebrities thinking that they’re regular people supporting him when they’re actually just some kids (who are pretty funny to be fair) messing around and screwing with him. And he’s totally bought it and now just looks even stupider than he did over the weekend when he lost his job. What an absolute disaster.

Here are some of the best tweets he’s retweeted so far – can this day get any worse for him?

@HulkHogan this is me and my mate, we know you're not racist! Ignore the press and haters we love you brother!! pic.twitter.com/Lvk0Gqi3Cb

@HulkHogan i am Ivorian and i love you brother, you're not a racist, u are the best, don't let the media get to you! pic.twitter.com/Op04YxEXFd

Hi @HulkHogan me & my dad are fully behind you, keep your head up through these horrid times #TeamHogan pic.twitter.com/H8RqZ08jnp

hey hulkster me & my son know your not a racist! can he get a birthday RT from his favourite wreslter TW @HulkHogan pic.twitter.com/jWxgdLKEDb

@HulkHogan I know your not racist hulk. Your the best ever!! pic.twitter.com/RZFjuvYnCe

This a picture of me and my mates, we know your not rascist, ignore the press and the haters brother @HulkHogan pic.twitter.com/jfTyyyiUgS

@HulkHogan Hey brother, me and my mate know you're not racist. Ur a legend. Ignore the press! Hulkamania, brother pic.twitter.com/OGguVbIWAe

I mean in fairness to Hulk some of these guys are pretty hard to recognise even if you’re massively into football/popular culture. Not that many people are going to know who Mauro Zarate is and I haven’t got a clue who The Sidemen are, but you would think that Hulk Hogan might have learned his lesson after he retweeted a picture of Josef Fritzl a while back because someone said it was a picture of him on his birthday. He should really get a social media team to run his Twitter account because he clearly can’t do it on his own and actually seems like he might be kind of senile by the way he’s reacted to this.

Part of me wants to think Hulk’s actually really smart and he’s just doing this for lolz, but then I think there’s no actual way that he would currently want to draw more attention to himself in his current situation, so doing that would be a completely dumb move. Unless he thinks getting more attention over doing stupid things involved in this situation would actually be beneficial to him? Surely he can’t actually think that though so I assume he’s just completely and utterly dumb or that he’s just absolutely lost it. Either way, it’s been fairly entertaining.