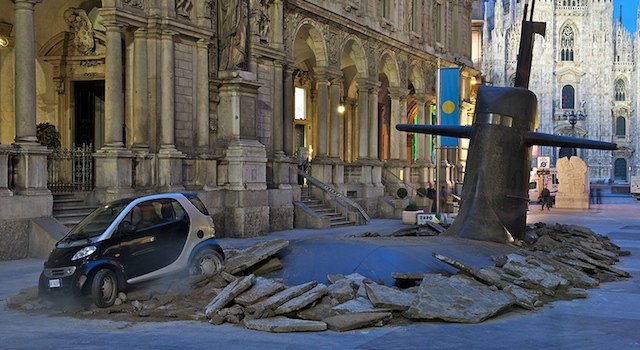 In the early hours of October 1st, a submarine burst through the streets of Milan.

A huge submarine burst through the streets of Milan a couple of days ago as part of a completely sick advertising campaign for insurance firms Europ Assistance IT and Genertel.

It obviously didn’t actually burst through the streets but advertising firm M & C Saatchi Milano set it up to look pretty much exactly like it had, complete with a performance from actors dressed in sailor costumes and scuba divers emerging from the wreckage in a daze and wondering how the hell they got there. The emergency services also made an appearance, carrying people away on stretchers and cordoning off the area, as did a Smart Car (why the hell would they use a Smart Car to promo anything?) that had been caught up in the action in a classic case of wrong place, wrong time.

More pictures on the following page.