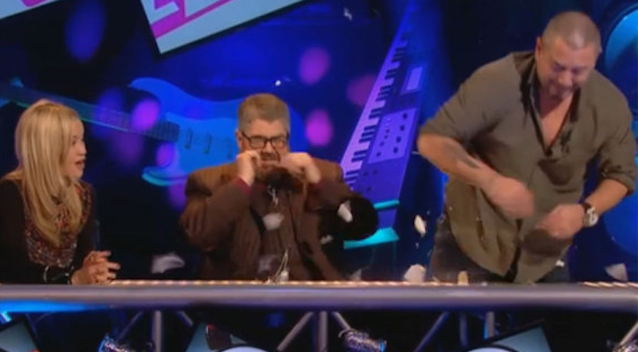 Huey Morgan from Fun Lovin Criminals is generally a cool guy, but he really couldn’t take a joke on Never Mind The Buzzcocks and smashed a mug and stormed off the set.

Huey Morgan is on tonight’s episode of Never Mind The Buzzcocks and he really doesn’t have a good time after falling out with the hosts of this week’s episode Rizzle Kicks.

He started getting moody towards the end of the episode during the ‘Next Lines’ round where contestants have to guess the next line of the song lyrics that the presenters read out and – as is usually the case on Never Mind The Buzzcocks – the presenters often choose lines from the contestants who are competing. Huey didn’t like that they were asking him Fun Lovin’ Criminals lyrics – probably because all of the lyrics are so stupid – and grew increasingly agitated as they kept asking him FLC lyrics.

Rizzle Kicks noticed this and asked Huey if that was OK to which he replied – ‘I’m totally alright with that, I just thought you guys might do something different for a change.’ To which one of the dudes from Rizzle Kicks replied ‘It’s part of the game Huey… It’s next lines mate’ and don’t really do anything to appease him throughout the next couple of minutes of the show. Then suddenly Huey has had enough and smashes his mug on the floor, to the shock of everyone on the show.

To be fair Rizzle Kicks handle it pretty well and get a couple of good jokes out of it while Huey just sits there stewing looking like a complete dickhead. I don’t really understand why the hell he got so angry about the Next Lines game though? I mean is playing a stupid game like that really worth getting so angry about?

Towards the end of the show Noel Fielding gets in on the act ripping the piss out of him and on the final shot it looks like he’s already left and walked out. I always thought Huey was a pretty cool guy but this is just really strange behaviour, and pretty much unnecessary as he must have known what he was getting into when he signed up for going on Never Mind The Buzzcocks. I mean he’s been on the show like 9 times, what the hell did he think was going to happen?  See what you think below: