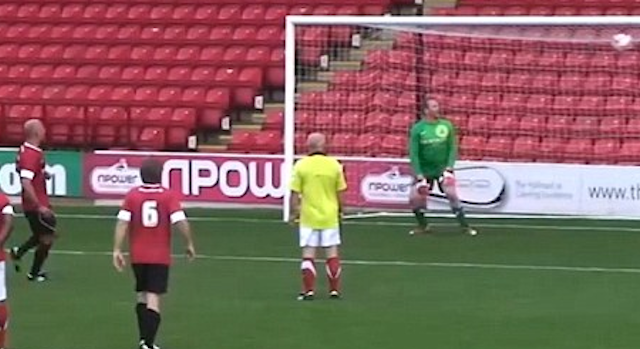 Turns out Howard Webb is a way better footballer than he is referee. Who would have thought?

Howard Webb gets a lot of shit – as do most referees to be fair – despite the fact that he’s probably the most successful thing this country has produced to do with football in the last ten years. But hey, that’s the lot of a referee and you’re never gonna have an easy ride of it. One way to get people to like you even more though is to do something completely badass like this. Howard Webb was playing in some charity match for Barnsley for some reason when he popped up to take a penalty in the last minute. Not feeling the pressure, Webb took one of the coolest penalties you’ll ever see, dining it into the top corner and giving the keeper absolutely no chance. To be honest, you should probably get him down to take one next time England have one because he’s probably better than most of our penalty takers, that’s for sure, although maybe not as good as the greatest Panenka penalties of all time. In fairness to the guy, Webb did also take a really shitty penalty earlier in the match which the keeper easily saved, so maybe he isn’t all that. You can see that one below too. http://www.youtube.com/watch?v=JrijN3fEdko http://www.youtube.com/watch?v=3h-FPNHiICY