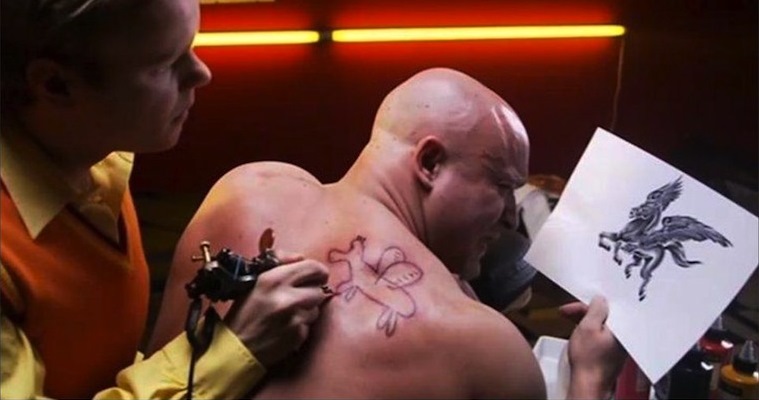 There’s only one person we can recommend when it comes to getting a cover-up job on that crappy tattoo you’ve been regretting for years: Misha Zeev and the House of ReAwakening.

Got a shit tattoo that you regret? Maybe you’ve got a coat hanger inked on your skin like Harry Styles or maybe some kind of multicoloured psychedelic mess down your forearm like Ed Sheeran?  Ever wanted to get your shit tattoo covered up, only were too worried that the tattoo artist wouldn’t be honest enough to tell you that even your idea for a cover-up tattoo is shit, thus continuing an endless cycle of shitty tattoo cover-up jobs, resulting in eventual ink overload and the inevitable amputation of your offending, crappily-tattooed limb?

â˜› Read Next: Man Tattoos His Name On Girl’s Face After Having Met For 24 Hours

â˜› Check This Out Next: Woman Gets Butthole Tattooed – Claims It Feels Awesome

This tongue-in-cheek production is actually the work of Converse — it’s one of those obscure adverts that has absolutely nothing to do with the product it’s supposed to be advertising. Needless to say we were pretty bummed to discover that Misha Zeev and the House of ReAwakening doesn’t really exist, not because we’ve got shitty tattoos that need covering up but because if we ever did, we’d know exactly who to call. It would be like getting tattooed by the best uncle in the world.