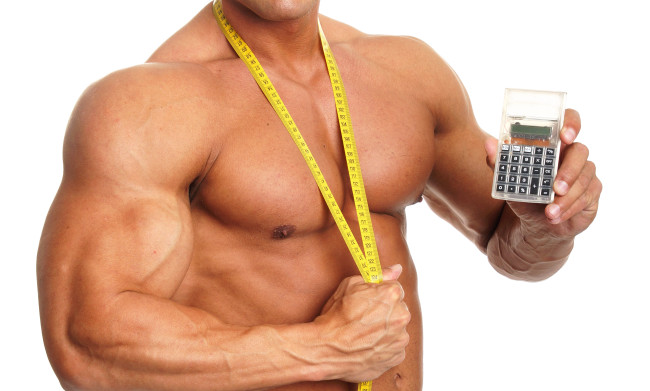 The greatest argument in internet history.

This week on ‘Internet Classic’ we’re looking back at one of the greatest arguments in internet history which will leave you questioning not only how many days there are in a week, but also perhaps the meaning of life as well.

It all started off on a thread way back in 2008 on bodybuilding.com, on whether it’s a good idea to do a full body workout every other day.

Genuine question from forum user m1nldess or a humble brag as to how hard he works out? Either way, going gym 4-5 times a week and working out 60-90 minutes each time? Pretty hardcore.

m1ndless gets called out straight away by steviekm3 because it wouldn’t be a bodybuilding forum without people trying to nitpick and start on each other. But if we’re talking basic math, steviekm3 is correct. There’s 7 days in a week so 7/2 = 3.5. But this isn’t a basic math class, this is real life. And that’s where TheJosh steps in… 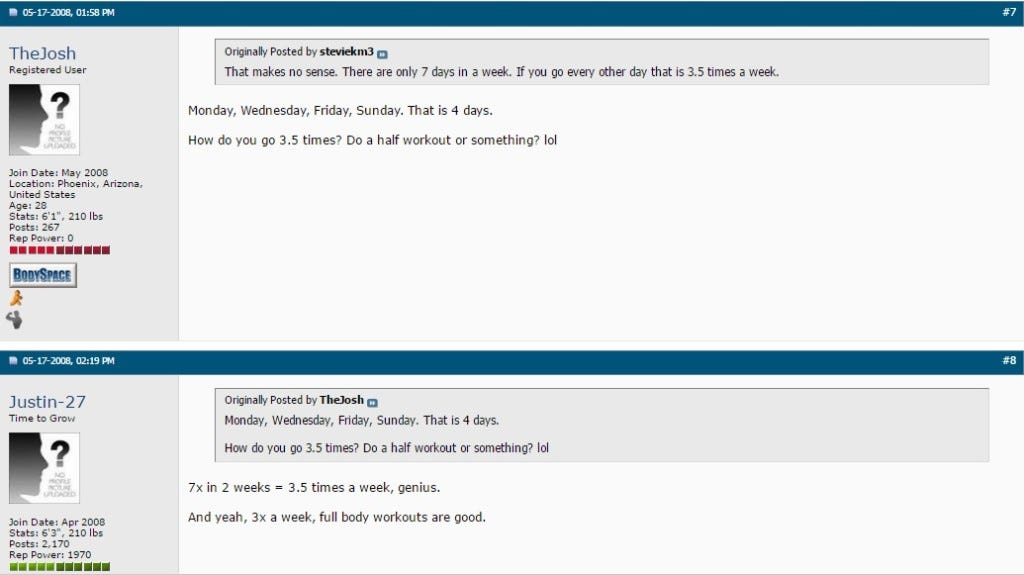 Firstly, love the way TheJosh drops a ‘lol’ at the end of his comment. Classic passive aggressive internetting. But yeah, TheJosh is right – it’s totally possible to go to the gym ‘every other day’ and end up going 4 times a week. Seems pretty simple to grasp but Justin-27 just can’t wrap his brain around it. But as we’ll see, it gets even more confusing from here…

TheJosh not budging and also hitting his opponent with another ‘lol’ and a diss at the end of his comment. That’s how you win arguments on the internet, people. Make the other guy out to be a complete loser and you’ve taken control.

Here’s where I started doubting my own sanity and wondering myself how many days there are in a week. Because steviekm3 is right- technically 2 weeks would start on that Sunday and end on the second Saturday. Once you get to the last Sunday, it’s the start of a third week. Could steviekm3 have been right all along???

OK now my brain is going haywire because I have no clue whose side I’m really on. Justin-27 is right – that’s 15 days. And he’s so cocky and sure about it that he starts speaking Spanish and calls TheJosh ‘el wrongo’. As TheJosh showcased previously being a dick and ridiculing your opponent is how you take charge of an argument. But I also see what TheJosh is saying about counting days so let’s see how this plays out… 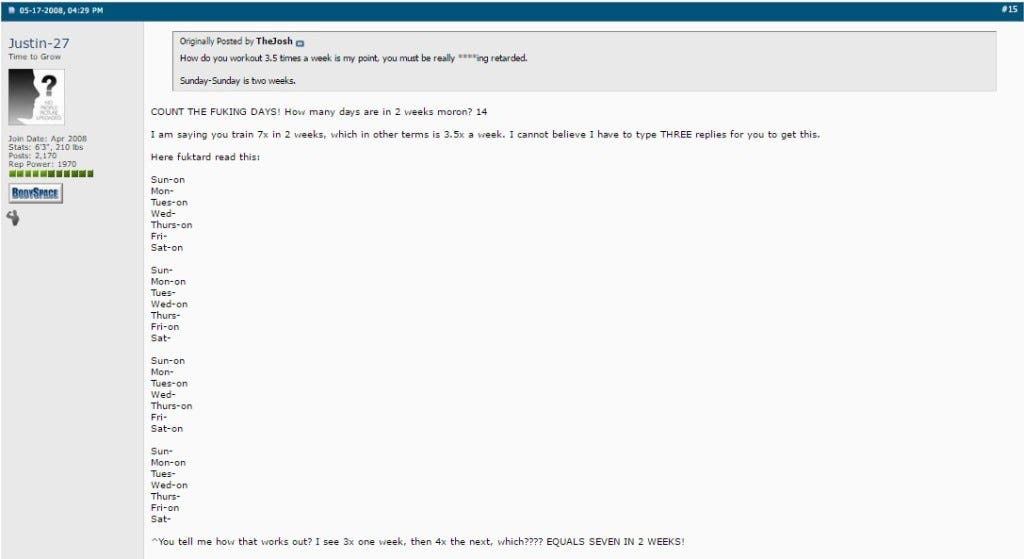 Justin-27 has now called TheJosh a ‘fuktard’, which was a way more popular zinger back in 2008 and probably isn’t used often enough these days. In terms of calendar weeks, again, Justin-27 is right. If you’re basing this on Sunday – Saturday weeks and working out every other day then you can only work out 7 times a week.

This is where you might look at the argument and think that TheJosh has lost, because like we said before in terms of calendar weeks, he’s wrong. But is it just that Justin-27 is unable to think outside the box?

Killer burn there at the end from Justin-27 after breaking it down to TheJosh like he’s a 6-year-old in primary school. Unfortunately for Justin-27, TheJosh is 100% committed to this rule he made up where you shouldn’t count days that obviously should be counted. And when someone is that committed to their beliefs you have to respect it on some level, even if they’re obviously wrong:

Justin-27 firmly in control at this point. TheJosh really not doing himself any favours although I think I do get what he is saying – he is looking at his life/workouts on a week-by-week basis. And when you do that, week 1 goes from Sunday to Saturday. But his next week of workouts don’t start till Monday, meaning week 2 ends on Sunday.

In retrospect over a decade later, this was just a simple misunderstanding between two (possibly roided-up) meatheads about what constitutes a single week. Does the week start when the calendar says it starts, or does it start on the day of your first workout?

These two argued over this for FIVE PAGES however I think I need to stop now because I am mentally from this absolute rollercoaster of an argument.

In the end, TheJosh tried to make out like he was just trolling…

…but then wanted to start the argument again, at which point a moderator locked the thread, putting everyone out of their misery. Probably for the best.

For more Internet Classics, check out the legendary ‘How Can She Slap?’ viral HERE. Unforgettable.