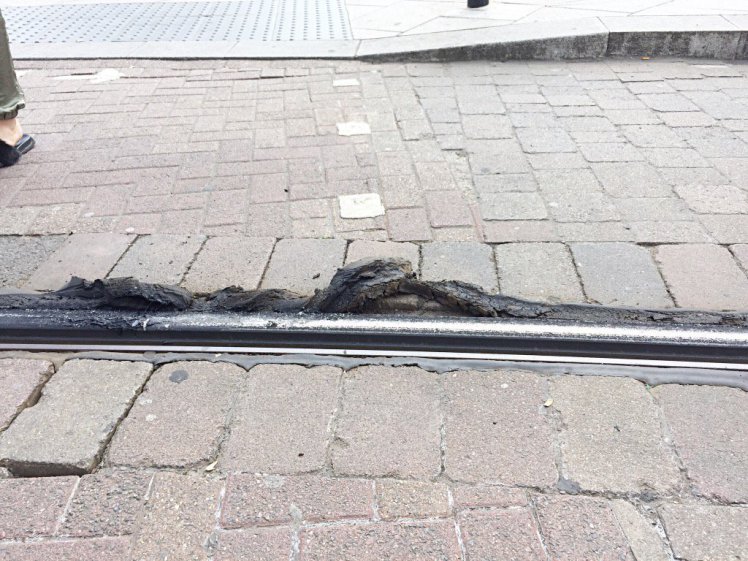 It’s getting hot in here.

In case you haven’t been outside and live in a refrigerator, the UK has been in the grips of one of the muggiest heatwaves of all time for the last few days and it’s getting to the point where it’s so serious that public amenities are actually melting.

Down in the capital in the borough of Croydon, a woman was walking along the street and noticed that the black seal amongst the tramlines were actually melting. This being the venue of the Croydon Tram Crash disaster which took seven lives and injured another 51 people, 30-year-old Sarah Preece was obviously very concerned:

I was walking down to East Croydon from Sandilands, and I got far as Lebanon Road and noticed that the surface of the tram tracks was hanging off – it looked as if someone had torn the surface.

I noticed that each time a tram went over the tracks that the damage worsened, and the trains made a loud grinding noise as it went over.

I walked down to East Croydon, and again the tracks were damaged.

I contacted TfL and asked “Is this even safe?”

They assured me it was, however I am not as convinced as it looked like the tarmac had gone into the tracks.

TfL blamed on flexible sealant and the weather, but when I asked when it would be repaired, if at all, they didn’t say.

I decided not to use the tram and haven’t since, because as a commuter I am starting to feel uneasy about using the trams as I’ve had to report several incidents in the past 6 months or so.

That’s kind of concerning eh? I wouldn’t want to be travelling on something that was literally melting and making a shit load of noise. It’s not really that unreasonable is it?

TFL have tried to quell fears by stating that the track itself isn’t melting, it’s just the flexible sealant. This doesn’t actually give it any structural support but merely provides a movement joint between the tarmac and the rail. Phew – I’m sure that’s going to reassure everyone who sees these pictures right? Right?

For more melting, check out what happens when you pour sulphuric acid on a McDonald’s burger. Have a guess.