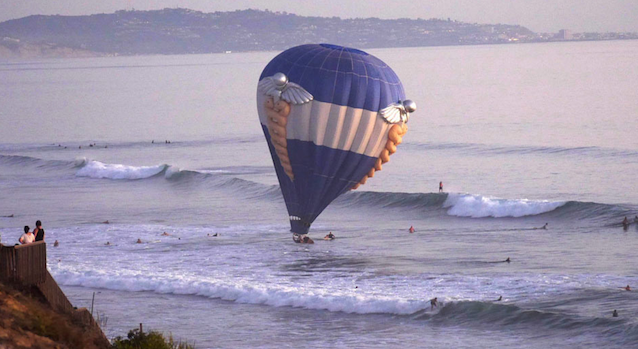 That definitely wasn’t meant to happen.

Proposing to your girlfriend and the moment when you commit to spending the rest of your life together is one of the most special times of anyone’s life, but it doesn’t always go to plan – like this proposal on a canoe boat where the bride accidentally knocked the ring into the water and it was lost forever.

That was pretty disastrous but I think this video might be even more ill thought out. A guy named Eric Baretto rented a hot air balloon in Del Mar, CA in order to propose and thankfully his bride was really into it and decided to accept.

Things took a turn for the worse though when there were suddenly high winds and the pilot found the balloon drifting out into the sea and was unable to change its course. There was no other option but to land the balloon in the sea and try to sort it out from there.

Although the three of them were smacked by several waves and had some trouble getting out of the basket, they were able to throw a rope to some surfers who were enjoying a night surf at the time and who managed to help pull the basket to shore. Close shave and probably a pretty good story, but not really how anyone planned it, no way.

Still, it probably isn’t as bad as some of the worst wedding proposals in history.