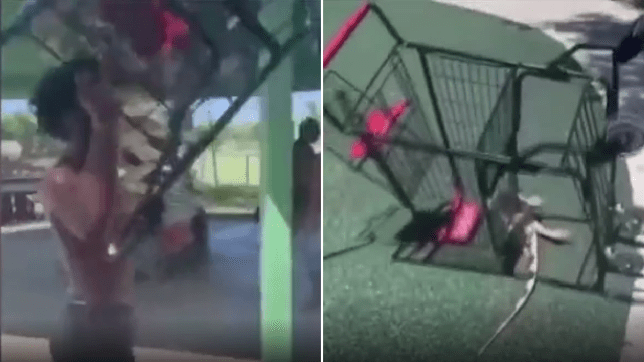 It really seems like there are a dearth of people with any sense of right and wrong when it comes to Florida as once again we’re back there for another story that really does make you question how some people can be human.

The video below comes from a random park somewhere in Florida where a bunch of kids are torturing an iguana to death with a shopping cart as they repeatedly run over it and eventually pick up its detached tail and throw it at the camera. It’s pretty messed up stuff so if you don’t want to see a bunch of kids literally destroying another living creature then don’t watch it.

Told you it was grim, but what makes it worse is that the kids might actually be able to justify their behaviour this time. It turns out that because iguanas have no natural predators in the state their population has boomed and this has caused damage to the infrastructure and other wildlife, which led the Florida Wildlife Conservation Commission to actively encourage residents to kill them.

Obviously they didn’t meant for them to do this in the most brutal and horrific ways possible, but that’s why everyone is cheering and whooping in the video and thinking that their behaviour is pretty A OK when it clearly isn’t it. Since this video appeared, the FWC have toned down their message as they realise that iguanas are still protected over anti-cruelty laws, but even so it’s kinda grim that they’re still telling people that it’s open season on them isn’t it? Surely there must be a better way for them to control the population rather than just killing them all?