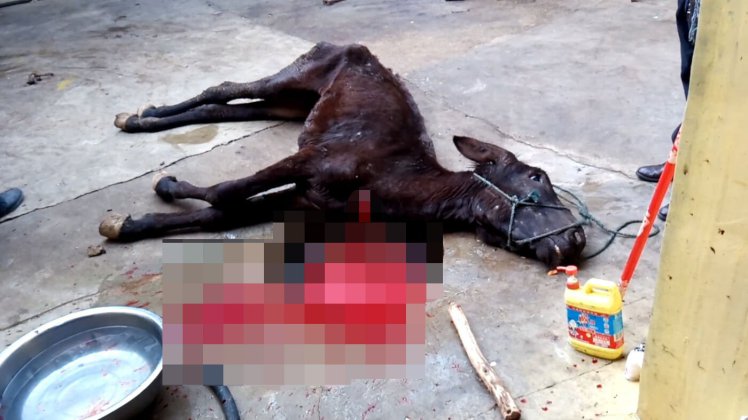 Whatever way you look at it, the fact that we kill animals in order to eat them is pretty damn disgusting – even if they do taste great – but there is definitely a difference between some of the methods by which we kill them in terms of the levels of brutality that they’re subjected to before their deaths.

This video highlights one of the most absolutely inhumane methods of slaughter out there. Over in China, 11 million donkeys are killed every year as their skins are used to produce a traditional medicine named ejiao which is supposed to improve blood circulation.

They don’t fanny around about it either – they brutally smash the donkey’s heads in with sledgehammers. You can see this in the video below, which was obtained by PETA in order to put pressure on the Australian government who are planning to export donkeys over to China:

Damn. That’s almost enough to turn me into a vegetarian.

A spokesperson from PETA also added the following about their undercover investigation into the abattoirs:

Terrified donkeys were beaten with sticks, including one who was hit and screamed at when she attempted to escape through a gate that was left open.

Some were so malnourished, injured, or ill that they were unable to walk. The only water available to them was dirty and green with algae.

One donkey was so malnourished that his ribs stuck out. Another was so sick that he couldn’t walk, so he was dumped into the bucket of a tractor and hauled away.

Sounds absolutely disgraceful, but I doubt it’s going to make any of us stop eating meat though is it? It might make you think about it though and I suppose that’s something. So it goes.

For more of the same, check out Chinese bear bile farming. Totally disgusting.