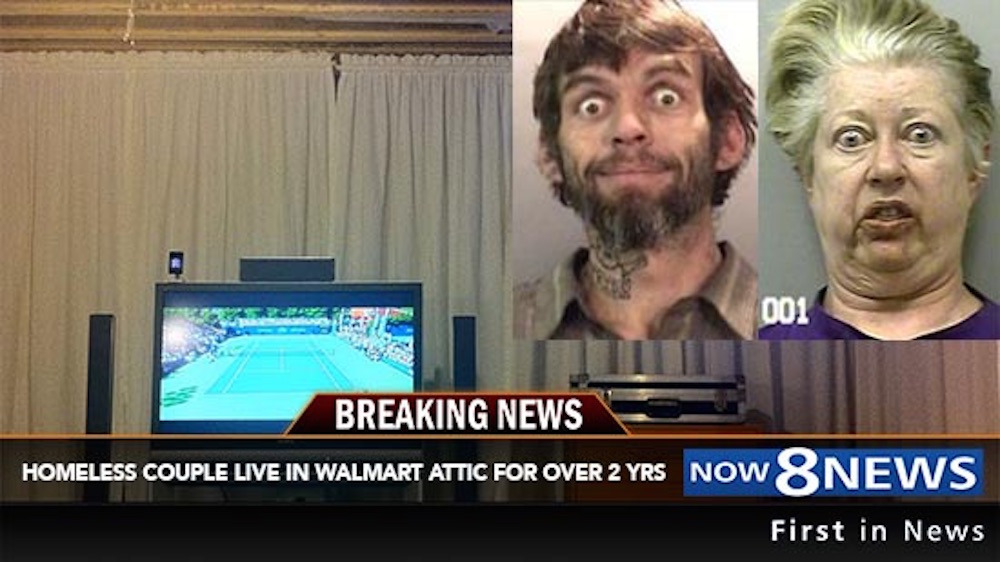 They had lived there for two years undetected.

Being homeless kind of sucks (although here are five good reasons here why it isn’t so bad) but sometimes you end up landing on your feet like this pair from Memphis, Tennessee who managed to move into the attic of a Walmart and go undetected for two years.

48 year old Wilbert Thomas and his 54 year old girlfriend Ingrid Malone also managed to ‘live in the lap of luxury’ up there and even set up a meth lab during their tenure. Lieutenant Marshall Weiss explains:

I don’t mean to laugh, but these people really got one over on Walmart.

In the attic, we recovered 2 pounds of meth they had somehow produced on a hot plate.

They also managed to get food, drinks, mini refrigerator, a big screen TV, surround sound system, bedroom set, hangers, clothes… I mean, if Walmart sells it they had it.

These people were living good. They even managed to splice into the satellite TV wire and ordered NFL Sunday ticket!

I assume NFL Sunday Ticket is like some PPV pass for watching live NFL games, but even without my knowledge of what that is exactly it sounds like they had a pretty sweet set up in that attic space. The pair were only discovered because they messed up too, which probably makes it even more annoying for them.

Apparently some Walmart employees heard them screwing from underneath their attic in the break room. Whilst they were banging, a head board on their queen size bed – which they also stole from the store – broke and this was what alerted the workers below.

During his confession, Thomas blamed this on the fact that he had also stolen some K-Y Jelly Yours+Mine from downstairs in Walmart, and it was this that had really screwed up everything and got us busted. I suppose you live by the sword and you die by the sword.

Just need to take some tips off these guys – the unbelievably weird stories of how six different people ended up living in shops.