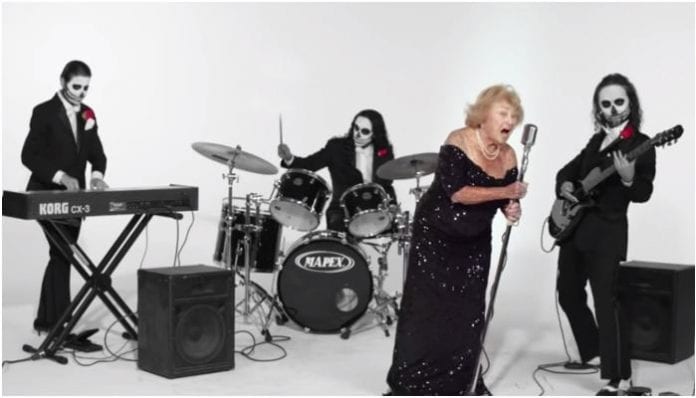 What’s the one thing you need as the singer of a death metal band? Anger. So who better to take centre stage than a Holocaust survivor.

That’s exactly what 97-year-old Inge Ginsberg is up to, and it’s safe to say she’s absolutely killing it.

But before we go into that, let’s start at the beginning to give you some of Inge’s backstory, which is nothing short of miraculous.

The Vienna-born poet has experienced an unconventional life, starting out in an affluent Jewish family. When asked what it was like for her as a young girl growing up, she said:

We grew up very well-to-do. We had employees. We lived in the city, and we also had a weekend villa. I went to a normal high school. We went to the dance school, where were trained to behave like before the [First World] War. We went on a ski week every year with our school.

Speaking about the Nazi uprising, she explained, “Nobody could believe it could happen.” Sadly, her family was separated following the Nazi invasion and her dad ended up in the UK. Eventually Inge’s mum was able to get her and her brother smuggled into Switzerland where they ended up at a refugee camp.

She was later employed by the American OSS to spy on Nazis and help out with those fighting the Germans. Crazy, right? That’s enough to fill a book right there. And yet the next chapter of her life is just as gripping.

When the war ended, Inge moved to America with her first husband Otto and together they worked in the music industry in Hollywood, pumping out classics like Dean Martin’s ‘Try Again’ and composing with Nat King Cole and Doris Day.

In addition to writing hundreds of songs and poems in English and German, Inge even worked as a journalist for some time. Although she always considered herself to be a writer – whether that be stories or songs – at the tender age of 93 she discovered her passion for death metal music after meeting a group of young musicians in New York.

Incredibly, they went on to perform “Trümmer” on reality TV, with Inge wearing pearls and an evening gown. Blending in with the crowd has never been her thing, and why should it?

It truly is a story for the ages, and one that you can find out more about in the New York Times op-doc Death Metal Grandma posted above.

From one end of the spectrum to the other, here’s a six-year-old kid fronting a death metal band.