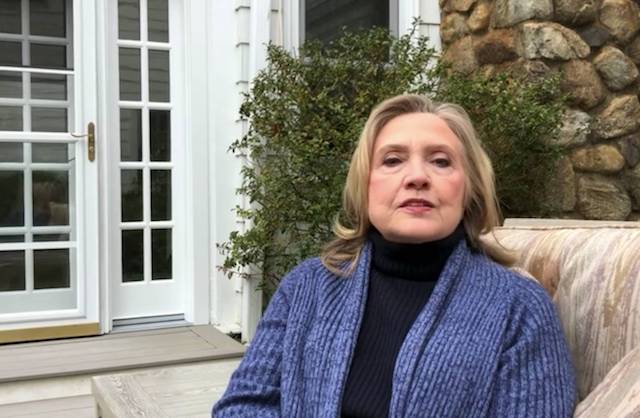 It’s come to this.

It’s well documented that there are a bunch of Americans that believe some absolutely insane stuff in the QAnon movement, but the people that they target with their ridiculous beliefs very rarely get a chance to even defend themselves – although you could argue that they shouldn’t really even have to because it’s all such massive nonsense.

‘Borat’ star Sacha Baron Cohen has started a new series titled ‘Borat’s American Lockdown & Debunking Borat’ where he has decided to give certain celebrities the change to answer their critics who level these crazy ideas at them. Anyone who saw the new ‘Borat’ movie will remember Jim and Jerry as the whacked out nut jobs who couldn’t stop pedalling conspiracy theories at him, with one in particular revolving around Hillary Clinton drinking the blood of children.

Cohen contacted Clinton to get her take on these theories and she relayed the following message to Jim and Jerry:

Thank you @HillaryClinton for talking to my friends Jim and Jerry from Borat. And thanks for clarifying that you don’t drink the blood of children — an ugly lie spread by social media and rooted in antisemitism and misogyny. #StopHateForProfit pic.twitter.com/j5nMNMhbvr

I know you’ve heard a few things about me that you might believe. I know that you’re not alone. It’s hurtful, I’ll be really honest with you. It’s hurtful, not just to me and my family but to my friends and other people who know this is not just false but sometimes painfully false.

So just as one American to another, I hope we can start trying to find common ground again and overcome all those forces that are trying to divide us and put us into little boxes apart from each other.

Not really explicitly denying that she drinks the blood of children there, but I suppose the less credibility she gives to these specific theories by not even mentioning them the better. Sadly, it doesn’t really seem like it’s had any affect on Jim and Jerry as when she finished speaking all Jim could say was that he couldn’t stand her. At least she tried I suppose.

For more of the same, check out this new study that suggests drinking human blood is the secret to long life. Maybe there is some truth to the conspiracy theory?