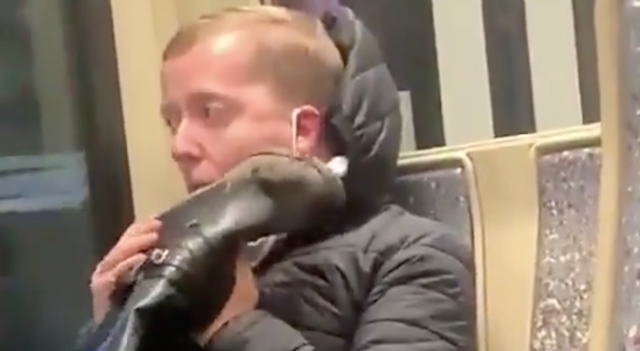 I’ve posted some really weird things on this site over the years but I’m not gonna lie – this could definitely be one of the weirdest.

Sadly I don’t really have any context for it other than I’m pretty sure it’s taking place in the UK and was probably fairly recently as the guy in question is wearing a mask around his chin like all the great thinkers of this era. He’s sitting on a train on his own and for some reason caressing this old dirty boot in his mouth, moving between the actions of sucking and licking it and looking like he’s trying to eat it.

Really is one of the most bizarre things I’ve ever seen. Take a look for yourself:

What did you have for tea lad?

Not much just deep throated a shit encrusted knee high boot, you? pic.twitter.com/kRnfARlss0

Yeah, really have got no idea whatsoever what this guy is all about. The obvious answer would be that the guy is crazy or has some kind of mental problems, or that he’s a real creep and has stolen the boot off a woman that he really fancies and is getting off by sucking and licking it, but even both of those explanations seem like a little too normal for what he’s doing. Surely he would just wait until he was in private to do something like this rather than act like this where anyone can see him on a train?

The internet being the internet, it probably won’t be too long until someone figures out who this guy is and ruins his life, so I’m asking everyone to go easy on him. We all like some weird stuff so give him a break – even if this is way, way out there.

For more of the same, check out this story about how selling shoes to perverts is a whole lot of admin. Maybe that’s somewhat of an explanation?