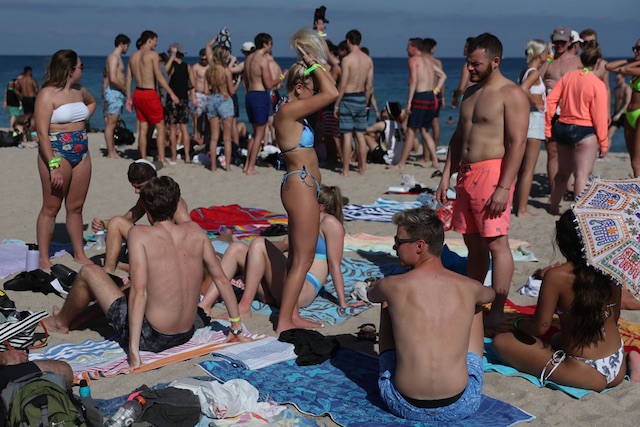 Remember almost a year ago when a whole bunch of idiot Spring Breakers went to Miami to party because they didn’t want COVID to ruin their holiday?

They might not have died, but I think everyone can agree that they were a bunch of idiots that definitely contributed to the spread of Coronavirus in America and the horrific death count that they experienced over there (not that ours was much better). Of course, one year on you might think that spring breakers would have learned that it wasn’t a good idea for everyone to head to Miami and party again, but you would obviously be completely wrong as a whole shit load of people descended on the city over the weekend, even though Coronavirus restrictions means there’s a curfew of midnight.

What about the police response though, surely those guys must have learned their lesson over the past year and not reacted with excess force to disperse this gathering? Lol of course not – they pepper sprayed and fired pepper balls into the crowd to try and get them to go home, and when that didn’t work they arrested over 150 people. Sure it’ll really slow down the virus having everyone locked up in close quarters in prison hey?

Anyway, here’s some footage of the police shooting out pepper bombs, a 19 year old body slamming a policeman when they tried to arrest him and a woman twerking on top of a police car:

Rough Spring Break Friday night on #MiamiBeach. This just happened at 8th & Ocean Dr. It appears to show a bodyslam takedown as police try to control a crowd. Witnesses who sent me this video say cops were forced to deploy pepper spray which caused a stampede. @wsvn #Exclusive pic.twitter.com/s8gS3Silxe

Here’s some of what was taken off the streets Friday night by @MiamiBeachPD. pic.twitter.com/bjh7hy6jYa

For more of the same, check out Chris Pontius and Steve-O recalling one of their wildest nights out in Miami. Those were the days.