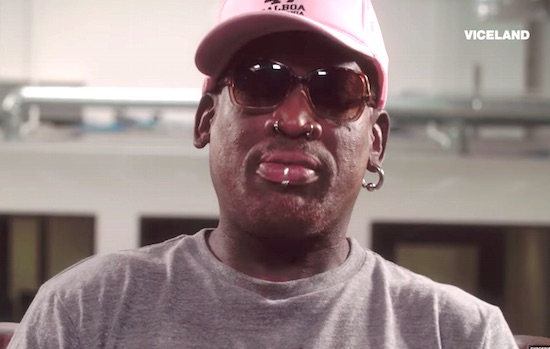 Dennis Rodman is one of the most notorious party animals out there, but even I was surprised about the contents of these stories he’s just busted out.

Speaking to Viceland as part of the ‘Party Legends’ series (go figure), Rodman had decided to recount three stories about when he’s broken his dick in the past. Yeah, that didn’t just happen once – it happened three whole times to him, and one time the nurse even tried to blackmail him by taking pictures of it and threatening to leak them online. Fucking bitch. Rodman wasn’t having any of that though, obviously:

Yeah I mean it’s kinda lame that Rodman just paid her off, but I suppose $25,000 isn’t even that much money for him. I bet that nurse was fucking buzzing that she got away with that eh?

You would think that Rodman might have learned his lesson from breaking his dick the first time though – it seems like it’s a pretty common occurrence and he hasn’t really taken on board that it doesn’t bend that way. I suppose it’s not like he comes across as the sharpest knife in the drawer though, is it? It was pretty funny when he managed to steal the Popemobile though.