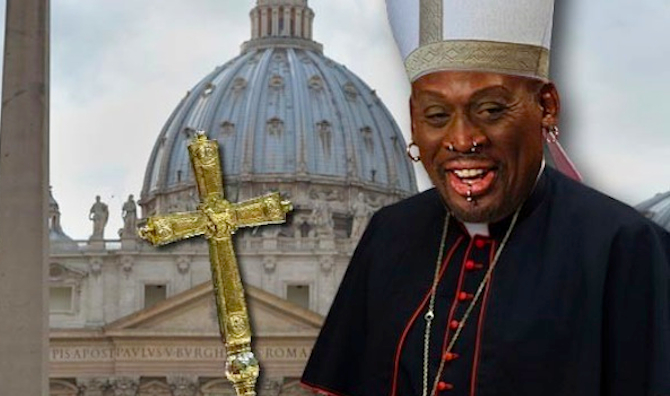 Remember when Dennis Rodman was looking for the Popemobile to ride around St Peter’s Square in on Wednesday? Well he finally got his hands on it and this is what went down.

So remember on Wednesday when we wrote about Dennis Rodman being at the Vatican and demanding an immediate audience with the new Pope? It turns out he wasn’t actually there just because he thought he was super important and deserved to be one of the first people to address the new Pope – that’s ridiculous even for Dennis Rodman.

No, it transpired that following his visit to North Korea that paddypower.com had decided to hire him as some kind of figurehead and then transport him to various ‘world events’ and I guess just kinda have him be there promoting world peace and gambling and whatever the hell else the guy stands for.

Of course, paddypower.com figured that a great publicity stunt for them would be for Dennis Rodman to turn up in a Popemobile in St Peter’s Square and everyone would be like ‘OMG, there’s the Popemobile, it must be the new Pope’ and then Dennis Rodman would get out and everyone would be like ‘WTF?! Iz dat Dennis Rodman?’ and he would say something like ‘I bet you weren’t betting on that! Get the latest odds at paddypower.com’ or something equally inane. To be fair that sounds like a pretty good advert, maybe I should go into the advertising business or something.

Anyway, this kind of explains the questions that I raised in the original article about Rodman demanding a meeting with the Pope, i.e. what the hell was the Popemobile doing in Northern Italy and why the hell did Dennis Rodman just expect that he would be allowed a ride in it? Turns out it wasn’t even the real Popemobile but a fake one that he was going to use for an advert, which makes the whole story a lot more believable.

And yeah, he eventually managed to get in the Popemobile. Unfortunately the new Pope had already been chosen and the smoke had already turned black, so nobody really gave a toss about it and he just rode it out of the square. It was so steamed up as well – must not have been made to the specifications of the actual Popemobile – that you couldn’t even tell  if anyone was actually in it or who was actually in it. Real smooth work there paddypower. I’m sure Dennis Rodman is really stoked that you basically made him look like a complete idiot. Still he’s probably enjoying all those $$$ you’re sticking up his ass.

A paddypower.com spokesperson had the following to offer on the matter:  ‘unfortunately our pimped-up Popemobile got stuck in bad weather in Northern Italy — which meant Dennis couldn’t do the rounds of St Peter’s Square in quite the style we intended! However he did manage to make quite an exit in it.’ The spokesperson also confirmed that it was actually Rodman riding in the Popemobile because let’s be honest it could be anyone from the selection of pictures of the event that have been released. But seriously, how is this Popemobile ‘pimped up’? It looks exactly the same as the regular one?

Still, you’ve got to admit that even though it completely failed at what it was going to do, paddypower actually still came out of the incident with some pretty good promo and I’m pretty excited to see where Dennis Rodman is going to turn up next to be honest. Although I think now that we know that he’s doing all these appearances and that it’s all sponsored by some gambling site it’s not going to be anywhere near as random and fun as it was the first two times. Maybe if they get their act together and actually achieve what they’re trying to do this time though it might actually rule. Only time will tell I guess.

In the meantime check out these pictures of Dennis Rodman (we think) in the Popemobile: 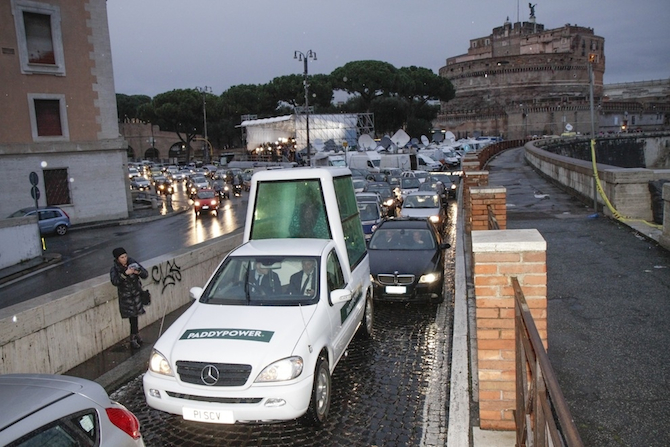 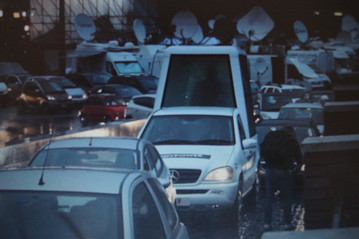 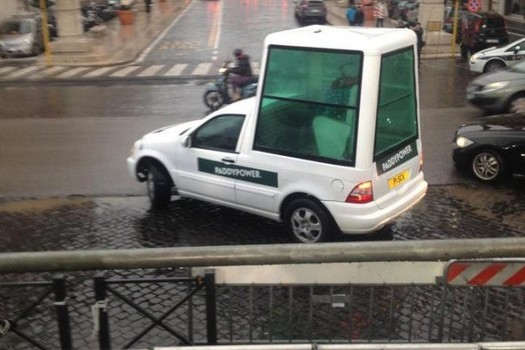 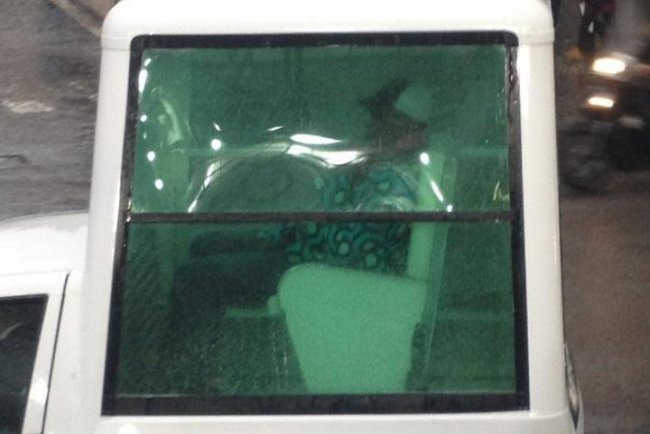