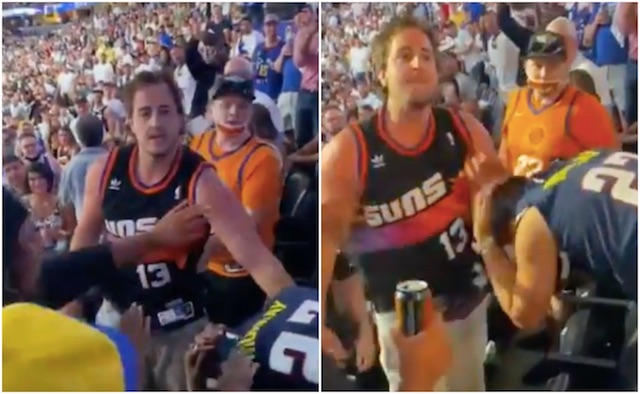 Fans obviously haven’t been allowed in stadiums for sporting events for the majority of the last year, but it’s good to know that they’ve picked up exactly where they’ve left off by getting wasted and starting fights with each other for no real reason.

We’re over at Game 3 of the Western Conference semifinals between the Denver Nuggets and Phoenix Suns in the NBA for this one, where some Nuggets fans with the most douchebag haircuts you could ever imagine try to double team a Suns fan who they’ve been getting into an altercation with about the game. Crazily though the Suns fan fights back and absolutely beats the tar out of them, leaving them bloody and beaten and running away with their tails between their legs, but not before he manages to put the cherry on top of the cake by calling them out and saying ‘Suns in four’. Ouch.

nuggets & their fans both taking L’s this series pic.twitter.com/4HjzGSEW0m

Yeah, still can’t get over h0w dumb those two guys look, but I guess that’s just kind of the look in that part of the country. Don’t really have an interest in basketball these days but I definitely want to see the Suns do the Nuggets after the way those guys acted there. There’s just no need is there, but I guess they got what was coming to them at least. Hopefully the Nuggets do too.

For more of the same, check out the Cologne fans running riot in North London a few years ago. Not really that cool.