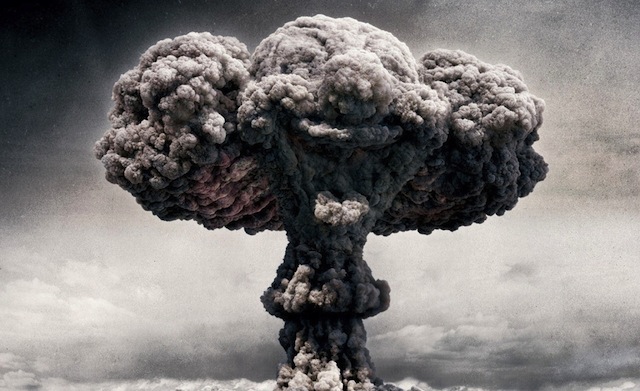 Here are some intensely cool videos of stuff going sky-high.

Fascination with fire is pretty universal for blokes. Maybe it’s an evolutionary thing. Whether it’s the BBQ or a shitty little tea-light candle we just cannot get enough of it. It’s like a caveat that comes with having a dick — drink pints, watch football on Sundays and, every so often, light a fvcking huge fire and chuck shit on it that creates as much lung-destroying acrid smoke as possible, making the next 3 gardens down uninhabitable.

I think we can all agree that fire is a pretty old discovery, and a bit of a game-changer — but the Chinese took it to the next level about 1,000 years ago with gunpowder. For the first time man could move mountains, castles and whatever the fvck else displeased him, turning it to dust (and probably having shitloads of fun in the process). Since we realised charcoal, sulphur and saltpetre made a pretty badass combination we have strived to outdo each other with explosions (of which there have been A LOT in gunpowder’s 1,000 year history), some of which have changed the face of the world we live in.

The most famous explosions in history are bound to include the atomic bombs dropped on Hiroshima and Nagasaki (ending the WW2 in the Pacific theatre and starting the massive 50-year-long clusterfuck that was the Cold War), perhaps the terrorist attacks that tore through London tube trains on 7/7, or even the overheating and eventual explosion of Chernobyl’s nuclear power plant.

But, these are all deeply uncool. Probably worse than Uggs on men, not having 3G reception or non-fair trade coffee (FUCK! That bad!). All 3 were major disasters that still affect human kind in a variety of horrible ways. The best explosions are the ones in which nobody gets hurt — glorified fireworks. Surprisingly, perhaps, these are the biggest. And by a VERY long way. You’re also likely to have never heard of any of them.

At the end of WW2 the Americans, quite sensibly, dropped all of their surplus munitions into really fvcking deep water. Us Brits, however, saw this as a bit of a waste. Instead, in 1947 we assembled a MASSIVE pile of grenades, bombs, bullets and other explodey things on an island called ‘Heligoland’. What makes the story just that little bit more British is that the islands weren’t even ours – they belonged to the Germans. Being the lovely people we are, however, 6,700 Tonnes worth of explosions later, we gave them back. In 2 pieces.

Now this roughly equated to 3,200t of TNT (or 3.2Kt) — the standard measure for nuclear and non-nuclear bombs. Compare this to the NUCLEAR bomb dropped on Hiroshima, which clocked in at 16Kt. Compare this again to the average hand grenade — the hallmark on Call of Duty of someone who has DEFINITELY stopped fvcking about, the go-to personal mass destruction device — which contains a mere 150g of TNT. Rather than being the standard ‘light the blue touch paper and retire 20 feet’, we set this badboy off NINE miles away. Now that’s one pretty fvcking big explosion to kill a bit of time after the war. In fact, it’s probably the biggest man-made non-nuclear explosion ever.

Fortunately, for ‘research’ purposes we filmed the whole thing.

Now, don’t start thinking that 16kt is a big explosion — it may have been big enough to change Emperor Hirohito’s mind about fvcking with the Allies, but that was just the start for nuclear weapons. Fortunately, seeing the effects of the first weapons of this type scared us into never dropping any more in anger — but it definitely didn’t stop mankind pissing around a bit. The first atomic bomb over 10,000kt was dropped just seven years later in 1952 (creating a 20m wide mushroom cloud that went up to 136,00 feet — 100,000 feet higher than the cruising altitude of a 747).

â˜› Read Next: Video Of A Failed Russian Proton-M Rocket Launch In Kazakhstan