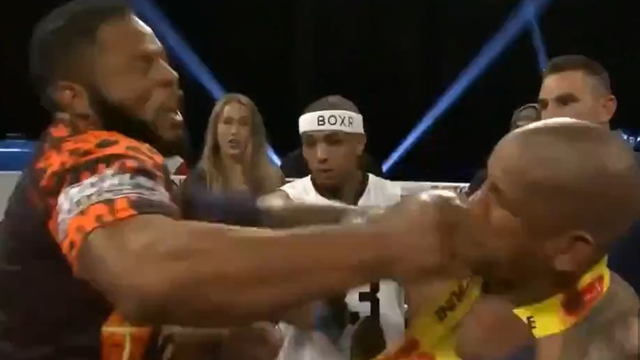 Don’t try to intimidate a former UFC fighter who has just won a bare knuckle fight.

After 43-year-old Hector Lombard defeated fellow UFC veteran Joe Riggs at BKFC 18 the other night, another member of the BKFC roster – Lorenzo Hunt – stepped into the ring trying to intimidate him (mid-interview no less – the disrespect!).

Yup, probably not a good idea to wind up a former UFC fighter who has just beaten another man in a bare knuckle fight and whose adrenalin levels are still through the roof. I mean Hector didn’t even wait to hear what the guy had to say, just instantly rocked him with a couple punches for trying to act like a tough guy and getting that close to him.

What I love about it is Lorenzo’s reaction to getting punched. He doesn’t even look too sure where the punches came from or how many people were swinging at him from how many directions. It all happened so quickly. He was not expecting it at all! Either way, lesson learned.

To watch an MMA fighter get his finger ripped off mid-fight, click HERE. Ouch.